For years, Don Draper has kept his past a tightly locked secret, revealing it only when he was backed into a corner completely (such as when Betty found his stash of mementos).  However, this week, a combination of alcohol, exhaustion, and tragic circumstances leads to rare moment of emotional honesty with Peggy, in which he admits to, amongst other things, his time in the Korean War, his father’s death-by-horse kick, and that he never knew his mother (thugh he leaves out the bit about her being a prostitute). 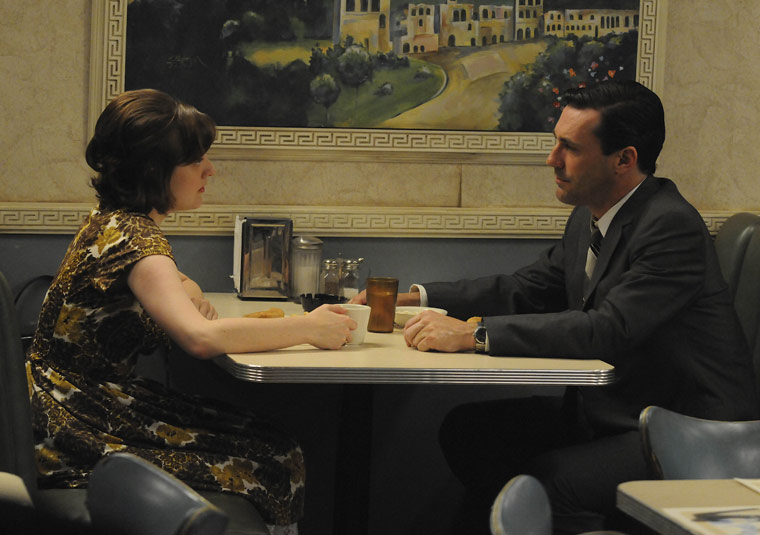 Of course, she doesn’t know the full extent of Don’s deception.  That he actually stole another man’s identity, after inadvertently causing that man’s death.  But by opening up to Peggy as much as he did, Don is finally starting to let someone in past the carefully-constructed wall around him.

And this is necessary, since the one woman who knew the truth about him, Anna, has finally passed away due to cancer.  We, and Don, knew this day was coming, but that doesn’t make it any easier to take.  Don puts off all episode returning a phone call to California, since he knows what news it must bring.  After finally making that call, he breaks down in front of Peggy, crying and admitting that Anna was “the only person in the world who knew me.”  If this episode has any flaw, it’s that some of the dialogue, like that particular line, is a bit too on-the-nose for my liking.

But that’s a minor complaint about an episode that features some of the finest work to date from both Jon Hamm and Elizabeth Moss.  In getting a show that works as essentially a two-person play (with cameos from Roger, Mark, and Duck along the way), these two get to show how far both they and their characters have come since the show began.

With everyone going to watch the second Mohammed Ali-Sonny Liston fight, it leaves these two alone, despite the fact that it’s Peggy’s birthday (unbeknownst to Don).  From there, we get an evolution of Peggy’s new ability to stand up to Don, with her first berating him for not giving her more credit on Glow-Co (to which he, not incorrectly, responds that as an employee all of her ideas belong to the company) and then making fun of him for hooking up with Allison. 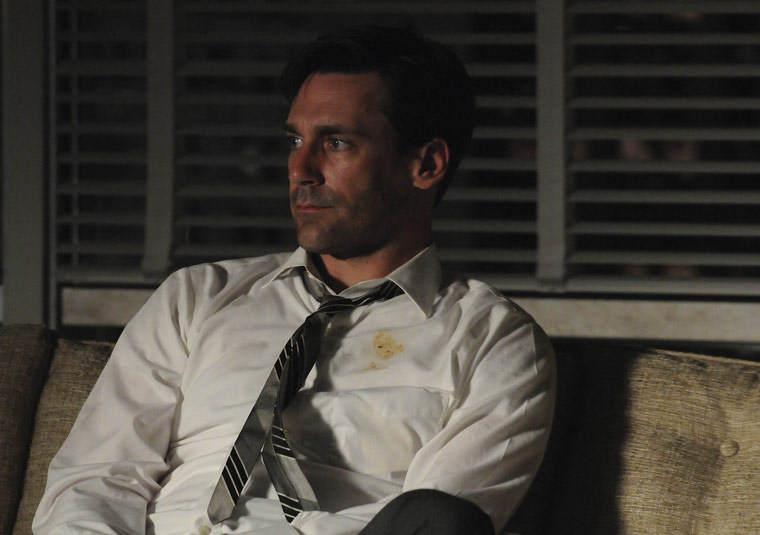 Peggy also does some opening up herself.  A run-in with a very pregnant Trudy leads to her speaking about the child that she gave up back in the end of season one.  Since that time, I believe the only time we’ve seen her mention this child is when she told Pete about it during the season two finale.  Here she admits to thinking of child often, of the life she chose to give up to pursue her professional goals.

All season long, Don’s “Dick Whitman” persona has been coming through, as his “Don Draper” mask slowly slips away.  Here, Peggy now feels and tells Don that Anna is no longer the only person to know the “real” Don.  Though she may not know all the details of his past, it’s similar in sentiment to back when Anna told him that she knew everything about him, but still loved him.  By squeezing her hand, Don lets her know how much that means to him, and admits to her that their night of emotional intimacy happened, something that he couldn’t do after sleeping with Alison, or any other person he’s been close to over the course of the show.  While it remains to be seen if this will help him to emerge from the pit he’s buried himself in so far this season, at least now he won’t have to do so alone.