She’s always been one of the most popular characters on Mad Men, but for most of the show’s run Joan Harris has also been one we’ve known the least about.  She sashays through the office, ruler of all she sees, regardless of whatever her job title says.  However, the brief views we’ve seen of her private life show us a woman unable to exert that same level of control outside the office.  She has what appears to others to be a dream life; married to a handsome doctor, but in reality she’s stuck with a man who once raped her in the very place she goes to work every day. 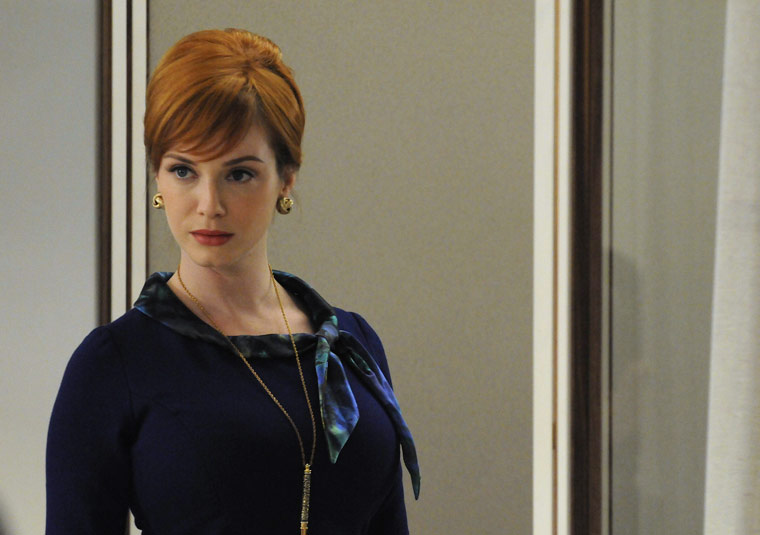 This season we’ve seen her control of the office start to slip, with a new group of employees who are young and unaware of just why they should do what this woman tells them to.  Lead by the obnoxiously smug Joey, the part-time copywriter, this new generation is not nearly as intimidated by Joan’s sexuality as men in the past have been.  Things come to a head when Joey tapes a drawing of her and Lane having sex on her wall and accuses her of walking around “like you’re trying to get raped.”  True, he doesn’t know how close to home those words will hit, but I still hope he gets drafted and dies slowly in Vietnam for saying it.  That will have to wait however, and in the meantime we’ll have to take some small comfort in the fact that Peggy fires him.

Of course, Joan isn’t thrilled about Peggy fighting her battles for her.  She snaps at her for taking action which she believes will only reaffirm to their male coworkers that Joan is nothing more than a secretary and Peggy is “a humorless bitch.”  While we know Peggy had nothing but the best intentions, Joan isn’t wrong in her interpretation. Peggy saw Joan and thought she knew exactly what she was going through and needed, without realizing how limited her view really was.

Peggy’s hardly the only one to make that mistake this week.  Betty runs into Don on a date and makes assumptions about the type of wild bachelor life he must be living.  While she isn’t completely wrong about his lifestyle, she is wrong about how happy he is with it, as is obvious to almost everyone else.  Her friend Francine even refers to him as “the sad bastard.”  But it’s much easier for Betty to hate him if she imagines he’s happy, so that's what she does.

For his part, Don, after last week’s heart to heart with Peggy, is finally looking at his life more clearly.  I expected him to make an effort to pick himself up, but I didn’t imagine him going so far as to attempt to quit drinking. Of course, this being Don, he makes it about fifteen minutes into the episode before giving in, but he still manages to not go overboard.

His reasons for cutting back on the drinking are explained to us through his journal entries, used as voice-over narration for much of the episode.  It’s strange for a show like Mad Men which rarely diverges from its set style, to suddenly be using narration, and it does feel awkward. Additionally, we don’t really learn anything from the voice-over that we couldn’t have inferred already.  We know he’s not interested in a serious relationship with Bethany, so him spelling it out feels excessive.  The awkward stylistic choice distracts from an otherwise solid episode. 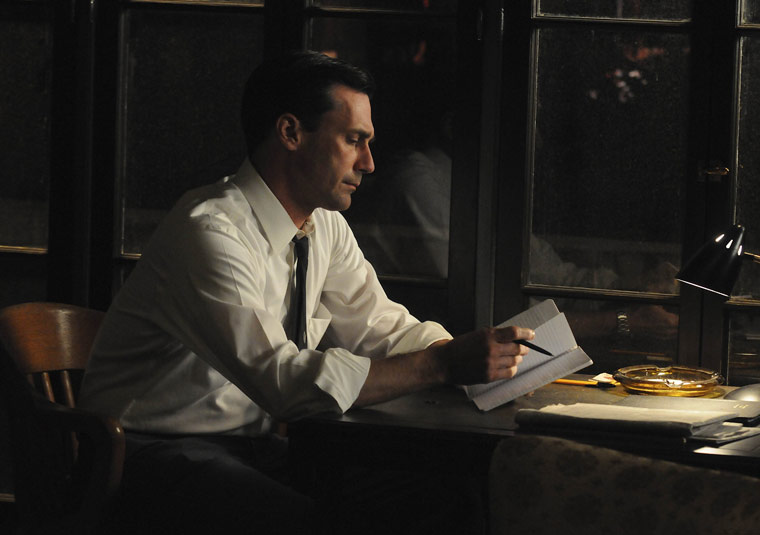 But aside from this, it’s nice to see Don attempt to pick himself up. Even if it’s still a work in progress, Don’s makeover does yield some immediate results in his love life. His date with Bethany ends with some oh-so-classy backseat-of-a-taxi action.  Also, he finally convinces Faye to go out with him and goes so far as to turn down an invitation into her place. He might not be all the way back to the Draper of old, but for the first time all season he seems to be headed in the right direction.

Whether he will continue in this direction or fall back on his old ways remains to be seen. In one of his entries, Don admits to wanting “some modicum of control over the way I feel.” To those around them, people like Don and Joan seem like they are in complete control, despite what the reality may indeed be. While he will never achieve complete control, the episode’s final shot, of Don happily playing with baby Gene (and Jon Hamm is adorable while playing with a baby), gives us some hope for the first time in a while the aforementioned notion may not be totally unattainable after all.