Last week, I rejoiced at the fact that Don Draper seemingly had his work mojo back.  That despite his personal struggles, he was still able to pull it together enough to maintain his façade for the sake of the business.  That when push came to shove, he could still bring out the Don Draper of old and impress a potential client.  I thought perhaps this was a sign that he had turned a corner.  That success in the office would lead to success in life.

I apparently was wrong.

I suppose it was only a matter of time before the mess of his life seeped into the offices of Sterling Cooper Draper Pryce.  In this week’s episode, we see much from Don that we’ve already seen earlier in the season.  He strikes out with women (in this case co-worker Faye, again), he lets down his family for the sake of his personal life (oversleeping through his planned visit with his children thanks to a late-night out with a random waitress, to whom he unwittingly introduced himself as Dick), and he drinks way, way, way too much.  But where he was able to pull it together for Honda last week, here it torpedoes his meeting with Life Cereal. 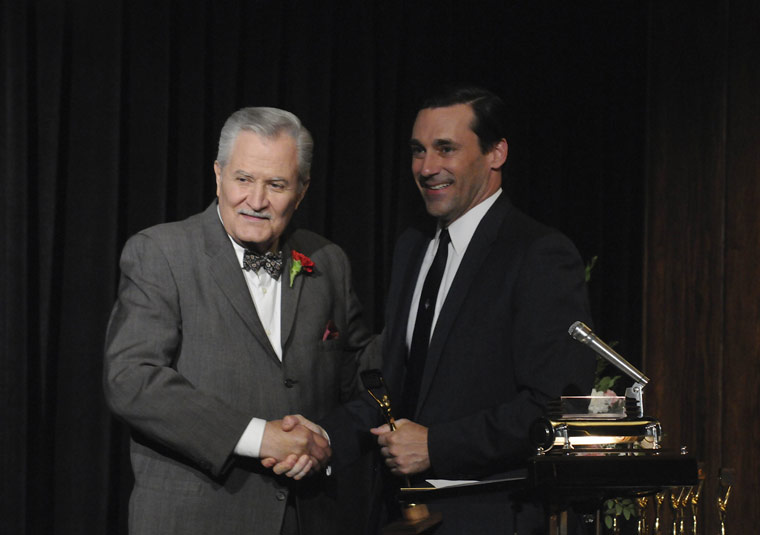 To make matters even more frustrating, this happens on what should be the best night in the brief history of Sterling Cooper Draper Pryce.  Don and company come away victorious at the Clio ceremony, being awarded for their much-praised Glow-Co spot.  However, too much celebrating leads to a disorganized pitch to Life, where he gives a drunken version of the “Carousel” pitch he gave to Kodak during the first season, focusing on nostalgia for lost youth.  But where in the past it was touching, with Don using photographs of past times with his then-wife, here it’s a sad display of a drunk trying desperately to gain a client’s approval.  When his “Eat Life by the Bowlful” tag-line fails to wow them, he proceeds to spit out slogan after slogan, eventually unwittingly stealing one from a talentless hack he interviewed earlier in the day (played by Danny Strong, familiar to fans of Buffy the Vampire Slayer).

We also, in a few somewhat awkwardly transitioned flashbacks, see when Don and Roger first met, with Don working at a coat store and trying to sell Roger a mink.  Between these two views, we get an image of Don we’ve never seen before.  Overly eager to please, desperate for approval, he’s hardly recognizable as the unflappable man in control we’ve come to know these past few years.

With Don dropping the ball, it’s the younger generation keeping the company afloat.  Peggy continues to grow in strength, here being the one to call out Don on the line he stole without realizing it (in fact, he was so drunk that later on, he doesn’t even remember changing the slogan in the meeting).  She also, hilariously, calls out the firm’s new art director (I miss you Sal), who likes to proudly proclaim his nudist tendencies.  When she can’t get him to focus on work, she engages in a game of “Strip Chicken,” one which she is victorious in.  The sight of her working in the nude (with the important parts covered by well placed set dressing, Austin Powers-style) while her male co-worker tries in vain to not look at her makes the episode a must-see all on its own. 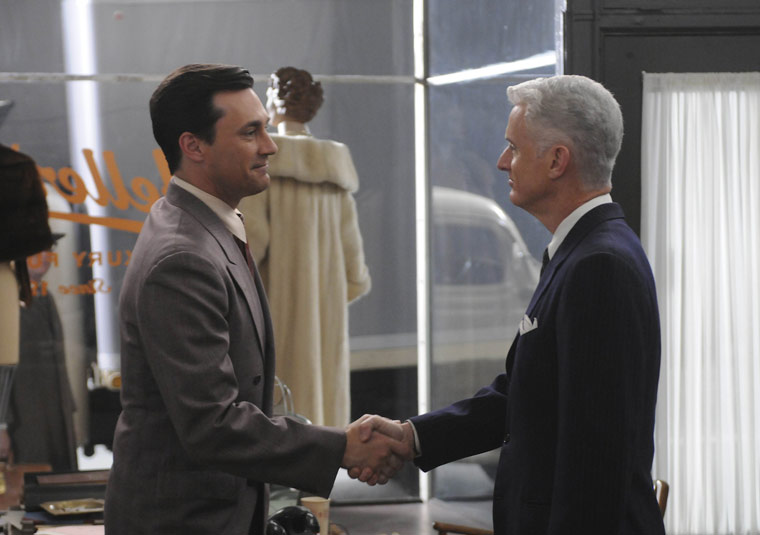 Pete also exerts his newfound power, lording over the former Sterling Cooper and possibly new Sterling Cooper Draper Pryce employee Ken Cosgrove (hi Ken!).  Still bitter over the fact that Ken was promoted over him at the old agency (he also still mistakenly thinks that Draper and company offered his current position to Ken before coming to him), he makes sure to let Ken know that if they are going to work together, this time the roles are going to be very much reversed.  While it’s nice to see Pete’s confidence in his business abilities continue to grow, it’s also a return of the petty and petulant little brat who he had seemed to be growing out of.  As happy as I am that Ken seems to be rejoining the cast, I hope this doesn’t lead to a regression in the maturity level of Pete.

Considering how Don is doing, I’m not sure how much more regression in its partners the agency can take.  I’m tempted to say that Don has hit rock bottom, but I’ve felt that way in previous weeks only too see him find new depths to sink to.  It’s possible that now that his struggles are more apparent to his co-workers (in case his secretary smashing up his office as she quit didn’t make it obvious enough), it could lead to some sort of intervention.  Outside help from somewhere is certainly needed, because he’s not turning himself around on his own.  What it’s going to take and who exactly he will be when he recovers (Don, Dick, or someone else entirely), both remain to be seen.  Hopefully the turnaround will happen before he does much more damage to himself or the people around him, but right now I’m not feeling too optimistic.