A couple months ago, it was announced that Madden NFL '13 on the Wii U will not have some of the key features that the already released PS3 and Xbox 360 versions carry, including their real-time physics engine, the Infinity Engine, or the incredibly popular Madden Ultimate Team mode, an online mode that lets you build your "ultimate team" using purchasable playing cards. It seems to almost make up for this, EA Tiburon has decided to stress function over form by making the most out of what the Wii U has to offer with its new and untested technology. What Wii U gamers now have to look forward to is a game that, while lacking some the perks of the other versions, will instead use the Wii U's gamepad to draw gamers into the experience like never before. 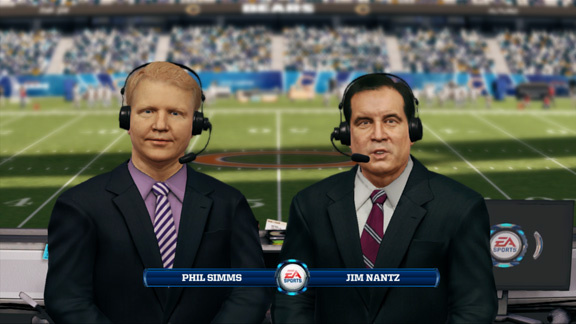 The Wii U accomplishes this by turning the gamepad into a literal interactive playbook; players will be able to keep the action on the television screen while all of their plays, formations, and other menus will all be on the touchscreen, able to be flipped to in a second at the player's convenience. It cleans up the actual playscreen immensely and is much less of a hassle for the player to navigate. This means that gamers can navigate plays, and subsequently change them, in literal seconds, much like a real live football game. The gamepad, aside from choosing plays/formations, will allow players to signal shotguns just by tapping a "shotgun button" once, or be able to change their offensive/defensive line before the snap by tapping on a player and dragging him to where you want him.

In the other versions of Madden '13, the game had select preset paths that you could put your linemen towards before the snap, but in the Wii U version, the players move literally to where you assign them. You can move your linemen into a newly formed gap, have them hook one way instead of another, change your defense from man-to-man to blitz, all in a few moves on the Gamepad. Previous Madden games may have given you the ability to read the opponent's line, but this is the first case where the technology gives you the speed and ability to properly react and exploit the opponent's weaknesses. Not only will this make the game much more accessible to new players, but it will definitely make the multiplayer and online competitive aspects of the game much more fluid and even fun to watch.

Madden '13 on the Wii will also boast a feature that many other Wii U games are using, which is the "detached mode" or the ability to play Madden autonomously on the Gamepad while the TV can be used for something completely separate. Of course in this mode you can not use the touch screen controls or the aforementioned "interactive playbook", and the action will appear on the Gamepad as it normally would on the television screen. It is a choice that is unique to the Wii U in general due to its new technology, and it is neat to see so many developers taking advantage of it.

It looks like Madden 13 will be another of the Wii U ports that have been hurt by a quick development cycle (it has only had a solid six months in full development), thus barring Wii U players from some of the features players on other systems get to enjoy. At the same time, though, many of these features were promised to be implemented at a later time, and it is wonderful to see EA Tiburon still trying to take full advantage of the fledgling technology that the Wii U offers. Most of the third party developers are using the gamepad and other Wii U tech to push the medium and their respective game genres in new and interesting directions. With this in mind, I definitely feel that Madden NFL '13 might have found a way to truly make the sports genre more accessible to new players. It also developed an innovative and efficient interface for the player to interact with that not only helps the player become better at the game, but also really captures the zeitgeist of the sport itself. It is daring and experimental, but who knows, it could really pay off and change the sports genre for the better. Gamers will find out though, when the game is released on the Wii U's launch day of November 18th.