Mafia II is out for PC and I have to disagree with the preview that my cohorts posted over in the XBox department a couple of weeks ago.  They didn’t care for it based on the Demo, but I quite enjoyed it and think it’s worth a look, for PC gamers at least.

For those not familiar with the franchise, it’s basically a Grand Theft Auto Clone, a really good GTA clone.  The setting is 1945-1955 in a fictional version of New York called “Liberty City”.  I mean “Empire City”.  You can free roam around the city, stealing cars, driving anywhere you want, listening to various period radio stations...

Alright, it really is quite substantially derivative of Grand Theft Auto.  So derivative that I stole a cop car and was surprised that I didn’t get the obligatory shotgun you always receive when you steal a patroller in GTA.

But that is not necessarily a bad thing; especially since Mafia II has the cajones to go where GTA never did- straight to The Godfather. The time period, the music, even your character’s name, Vito, all evoke The Godfather and that alone will warrant a little investigation for a lot of folks.  The design, the color scheme, the radio commercials all make you feel like you’re in Brooklyn in the 50’s, as soon as the game starts.  The voice work and dialogue are terrific, with Robert Costanzo doing the voice of your pal Joe (Costanzo played Detective Bullock in the Batman cartoons as well as “The guy from Brooklyn” in EVERY movie made in the last 35 years)

It distinguishes itself from GTA with the combat.  Mafia II uses a Cover System similar to Gears of War (Which makes Mafia II sort of “Goumbas of War”).  It plays more like a third person action shooter than the GTA series, and also requires you to be a good citizen much of the time (You can’t gun down random people and have to really go out of your way to get into a fistfight). 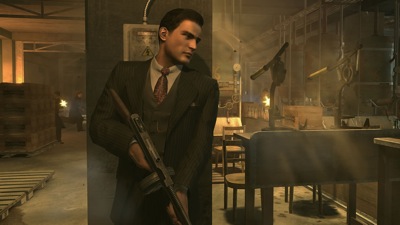 Did I mention that it has officially licensed Playboy Centerfolds from the 50’s?  If everything else I’ve said doesn’t convince you to try it, you should take a look at the gams on those dames!