How gross… there’s a spider defeating its mate through the act of eating and… oh come on! The penguin is back and he’s stealing my fish, what an asshole… oh hi! I’m Tristan Wong, back with another exciting look at another game that recently came out with a demo—I know, how exciting is that? I mean, the screenshots look great… but when you actually touch and play the game, scrumtrelasint… oh wait, I forgot to say what game it was. I’ll let you all figure it out on your own, as for now here’s the latest scoop and thoughts on this demo, available to you now! Note to all who touch the game, this isn’t an official level of the game, this is just a level built specifically for the demo. So when I go through this look, I’ll only be talking about what I saw and what I played… nothing about story, etc.

So let’s get to the meat of this quicklook… the happening and what I did throughout the demo. You are this guy… (I can’t remember, nor does anyone even mentions his name that often) who was hired as muscle by the Mafia to work with a man named John (an obese fellow with a habit o 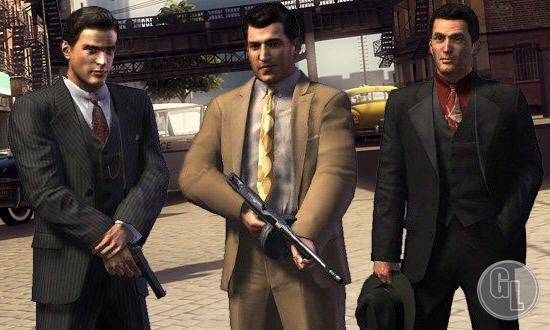 f drinking on the job, who provides the comic relief) and Henry if I’m not mistaken (who in turn is the more serious fellow who came to America because of Mussolini, Italian dictator). Together, these three set off to kill this fat bastard of a guy for reasons they don’t elaborate on too much (the ambiguity of the scenes don’t help as they are deliberately vague about the whole situation, even at the beginning… damn god-father). That’s the story of the whole thing essentially, the events of each are described down below.

So you start off at your house, and you answer the phone… how exciting, just like a Mafia Boss. Then you have one of two options, either change into your tuxedo… shirt and pants, or just leave you leather jacket on for a casual appearance. Either way, it doesn’t affect your identity and you still look like a cheap Adrien Brody, which isn’t good… he’s grotty at times. So with that out of the way, you make your way out to New York city, in the suburbs of the quiet little neighbourhood that lives in brilliant sun-light, showering the parks with its vitamin… something, I didn’t take chemistry. I mean, it looks absolutely phenomenal and the huge population of both cars and people fill the streets till there really isn’t a time where you accidentally run into a pedestrian when you try and exit your garage.

The garage holds three different cars… least last time I checked, and in the demo there are only three you can try. Ten slots of awesome, all in that little tiny cube of a garage… some gangster my dude was. Then after you take your car out of the garage, you have to make your way through the New York area to your destination. The skylines are beautiful and the lighting that outlines the New York skyline is mesmerizing. It almost feels as if you are trekking Liberty City all over again… and not at all is that a bad thing, kind of wants me to get back to GTA IV for nostalgia. Lighting, population, immersion, sound effects, and tight yet questionable driving mechanics make going from one locale to the next a dream.

The only complaint I can levee about this particular sequence (going from one area to the next) is that civilian AI and drivers are rather… interesting if not just flat out tard-bags. I mean, I ain’t no computer (or am I?) but when I starting driving out of the garage and onto the streets, it be best if you move instead of waddling in front of me and into my driving path you fat bastard. I mean, they start yelling and what not and I’m sitting there all like… “Well if you weren’t tongue screwing your husband there… maybe perhaps I would’ve avoided hitting your gigantic ass, just a thought you know?”. And with that being said with the amazing looking graphics (I hit a couple wood fences and since the game is being powered by PhysX, an Nvidia exclusive engine, it fell down and looked graceful while doing so) and the mesmerizing scenery of the roaring 20’s, the frame rate is all over the place. It’s like a kid high off candy, you can’t control it and when you do… it always seems to pry itself away from conformity and jumps around like a mad man, just pissing you off when you catch yourself in a really intense firefight.

Now we’re finally at the location of the hit, we sort of get two showcases in one. First off, the amazingly directed voice acting… the main character and Henry having a back and forth about why they came to America. The amazingly dark and gritty voice of Henry stole my flailing hearts grace and just had me take to him as if he was my own. I mean, it will send chills down your spine, being how cool and deeply played many these three characters are. Then you have John presenting himself as the comic relief with a couple witty lines directed at Henry (there here and there, dribs and drabs). But after that showcase of voice work, the fun begins… the black cars arrive in front of the warehouse and the shoot out begins.

Now I never thought the mafia back in the day had such tools, but at the very beginning of the ambush… Henry and John give you a fearsome machine gun that just sounds like a dream and feels like a sexy

night in Vegas to shoot. And that fearsome machine gun is the MG42… yes kids, the most feared machine gun in history is here in flying colours, but only as a mountable machine gun that you must put down after you kill everyone outside of the house across the warehouse you camp in front of. It’s fun to shoot and by golly I wish you can take it with you… but after that you have to leave to head back down to assault that little warehouse full of innocent workers and what not with nothing but a Colt .45 to boot. The game takes an interesting twist in its feels just like a carbon copy of Gears of War albeit the cover is way too sticky for its own good (that’s what she said). If you take cover… you have to press A again to snap out of cover which is very annoying considering how dynamic the battles can be… especially inside.

The inside is the edge of hell, you don’t even want to gaze into it… trust me. But with that being said, it is one hell of a showcase for shoot outs and graphical features in store for us with the developers new engine… the Illusion Engine. Hazy surroundings, phenomenal sense of destruction (wood and concrete tear apart nice and smoke moves when you move through it!) and real nice feeling of hecticity of the action through the use of great sound and tense tracer darts floating about out in the battle, it really is a dream to play. Tense corridor crawls and open floor shootouts with a shotgun… and Tommy Gun near the end, this is where the real meat of Mafia II comes to play. However, when the shooting gets tense… my god does the frame rate start to hammer like… something getting hammered. I mean it cannot live up to at least thirty frames minimum, it really suffers throughout the awesome sequence. Which is highly unfortunate for all of us… because shooting guns and fighting the foes that oppose your little gang never felt so great in the first place.

After the shootout and you kill the fat bastard dead in his tracks (I won’t spoil the whole demo for you) you have to escape with a wounded Henry back down the warehouse which explodes all around… there is some internal monologue, but after that it’s just a drive out from the crime-scene and cut when the gang is surrounded by police (to be continued)… and that’s the end of the demo. What a hell of a way to end a demo… what assholes aye? I mean don’t hate it when demos tease you with all this delicious game mechanics and what not, only to cut out abrup—…