A new Magdalena is out this week and this time is not only a new issue. Magdalena, issue seven, is the start of a new story arc by the creative team of Ron Marz and Keu Cha. It is really a great jumping on point for new readers. Although the story is continuity-driven, you don't need to pick up the last few issues to know what the gist of the story is.

The book also features one of the best recap pages out there. With four panels and few words, it tells you all you need to know about this character. Don't believe me? Then check this out: "descended from Christ and Mary Magdalene a Magdalena in each generation serves as the chatolic church's supernatural enforcer. The current Magdalena is Patience mentored by a atican agent named Krisrof. The Magdalena program is supervised by Cardinal Innocent, a man willing to do almost anything to maintain the Church's influence and his own personal power. Patience has agreed to remain in the Church's service, though she does not trust the Vatican hierarchy. It remains to be seen whether they trust her."  this is precise and to the point, so you don't really need to know about what happened in her last adventure because it works as a self contain story but still maintaining a continuity as a whole. 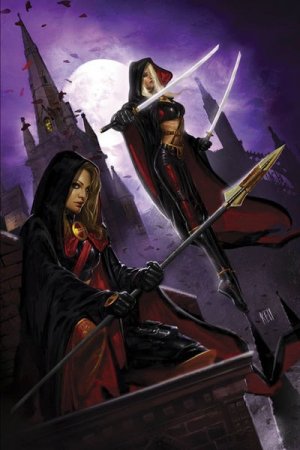 The story starts with Magdalena fighting a guy that turns out to be a vampire. The fight is well illustrated and has a nice choreography to it, only stoping or pausing to demonstrate some flashy poses. In the end of this scene, it is revealed that this is another Magdalena named Anneli. She's sponsored by Cardinal Ferretti, a competitor to Innocent who believes that the current Magdalena has lost the way of the church. But to become the next Magdalena,  Anneli needs to recover the Spear of Destiny. Of course Patience has the spear and she won't give the spear without a fight. So some girl-on-girl action takes place and in the end it looks like Anneli will win.

The issue is mostly all action. The artist does a great job on delivering it and it also portraits the sex appeal of these female characters in such an efficient way that many teenage boys will be thankful for. The art carries a good storytelling rhythm but the only thing that stops it from being great is that the art is conscious to demonstrate stylish poses that although may look attractive, seem unnatural to the rest of the story. This eye candy is what makes a book like this to not be taken seriously.

The story is interesting and stays true to its characters. It might not be for everybody since religion is involved, but that doesn't stop this book from being entertaining. I actually enjoyed reading the world these characters live in. The book uses the Catholic and Christian mythology to their advantage, giving the book a vast and rich fodder to the characters' background. Ron Marz gives us a stunning "bad girl book", but it seems that he and somebody in the editorial forgot that the book has a recap page in the beginning of the issue, because later in the middle of the story there is a another unecesary recap. These pages could've been used to further develop this story. But that's okay, as it will give you another reminder of what this story is about just in case you skip the first recap.

Overall the book stays true to its genre but at the same time gives us a good solid story. As you know some of these "bad girl books" don't seem to think much on delivering good stories -not that there's anything wrong with good old fashion eye candy- without a good story the book can't get too far. But this book can and will, if they keep a strong creative team around. This story arc looks awesome not because of the girl-on-girl action... well mainly for that but it also has a solid story too. So check it out and enjoy the fight.