Okay, so we learned from the last issue that the sea is the home for many fish, as well as Steve Ocean, aka Marineman aka marine biologist. We also learned that Steve’s dad works for the Navy. The second issue answers some questions raised in the previous issue, only to open a whole web of new ones.

In this issue Steve is showing Charlotte (the Lieutenant from the last issue) around the area and it is clear she does not wish to spend any time with him, making it awkward for Steve. When they are having lunch a child screams as his mother has fallen over from a great height into the crashing waves below, Steve dives straight in and pulls her out. Demonstrating his skills to everybody around. 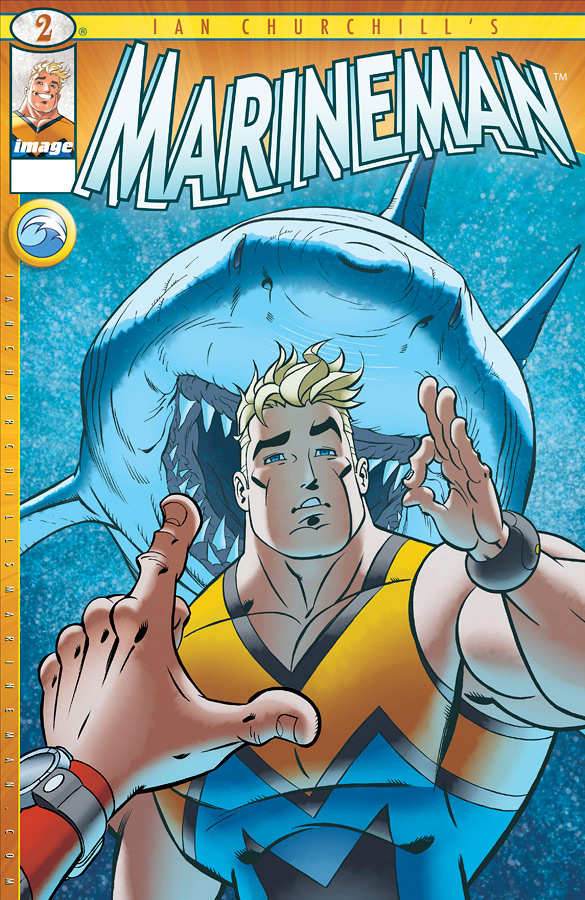 Not long after, he upstages this with another magnificent feat. Filming his new show “SharkWatch”, the cage his friend Jake Clearwater is in is broken off bt a giant shark. Without thinking Steve dives after him, punches the shark away and slowly ascends with his friend. He had been underwater for an hour without a breathing apparatus and being viewed by thousands. His father then rings a man stating “The genie is out of the bottle” and then cutting to a different man again saying “I have finally found him.”

Ian Churchill (artist on Cable, and this being his first written project) has improved on this issue, working on the mistakes that were present in the last issue. For starters, the last issue was extremely wordy with the first page alone feeling like a document. This issue still has plenty of text compared to what would normally be seen, but has been cut down from the previous. It is the more important information that is presented in this issue, not just talking for the sake of talking. Churchill comes across as a more confident writer already in such a short amount of time.

Not too much can be said on Churchill's artwork. He has improved in some ways from the last issue in a few subtle ways (touch ups on faces and background artwork). Although the most obvious is his improvement on drawing Steve's muscly arms. They still look ridiculous in size (which I get is his look, so nothing wrong there) but now they do not seem to be so awkwardly placed. They look as though they are natural, like they belong. Ian Churchill paired with Alex Sollazzo (Morning Glories) for the interior colouring. The same style as with the last issue, bringing a vibrant life to the characters and their surrounding environments.

Wrapping up, this issue is an improvement on the last. What has drawn me to this comic is the “feel good” vibe it gives to me as a reader, something Churchill had mentioned he was aiming for. For me personally I'd love to see how this series will develop and I hope that it will stand out. I recommend picking up this series if you like feel good adventure.