Swimming at the beach is now safe! As long as you know somebody like Steve Ocean who can breath underwater! In an age where every character seems to have a dark past, Marineman is the chiselled boy scout image incarnate. Steve Ocean's (Marineman) secret is no longer a secret. He was an oceanographer celebrity. His abilities were revealed to the world in issue two when he jumped into the ocean to rescue his friend and he was underwater for roughly an hour. Issue three was an origins story and now issue four escalates the drama.

In this issue, Charlotte Greene and a man named Fuller are in a sub that is sitting on a ledge over an underwater chasm. Marineman is sent by the navy to retrieve the sub but there is a bright flash of white light. They wake up in a room and are approached by an aqua-skinned woman who leads them to an elderly man stating to Marineman “I...am your father”. 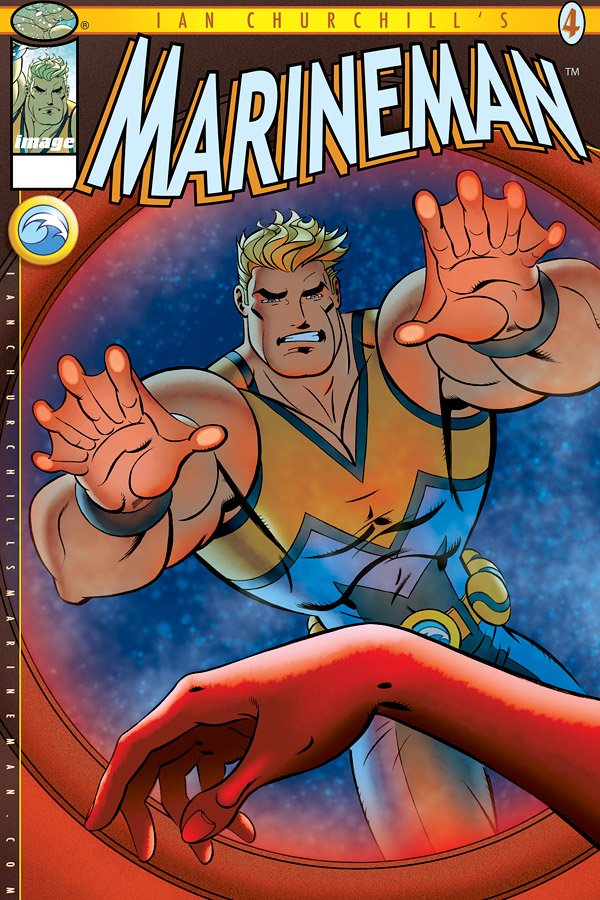 Ian Churchill (artist for titles like Cable and Coven) continues to amaze me with his execution in story telling. He has said that Marineman is the comic he would have wanted to pick up and read as a child, it casts echoes of the Silver Age of comics with its happy feel no matter the circumstance. With having raised questions about a mysterious flash of light in the previous issues it is answered. With answering one question, Churchill has opened the door to more.

Even though this is only four issues in Churchill has been able to keep it close knit and kept it in the direction he has wanted to go with it. The plot summary I gave earlier, that is almost the entire content of the issue, short and sweet. He knows what he wants to do with his characters even though very little happens there, the chemistry between Steve and Charlotte that can be taken beyond the 2D pages they are shown on. I am keen to see how Churchill continues to develop these two characters and the world that he is building around Marineman.

With Churchill already being an established artist it is no surprise that he did the artwork for his creator-owned series. He has continued to improve on drawing Steve Ocean to not look so awkward because of his towering build. A thing to note is that everybody seems to have perfect cheekbones, as unbelievable as that is, it is Churchill's chosen style (so pointy!). In one panel where Steve is poking half his head out of water and so the panel is half in half out of the water just looks great.

Ian Churchill teamed up with Alex Sollazzo for the interior colouring. Everything is bright and campy and you just get taken away in a land of smiles. Seriously, the colours are all bright, even in the shadows. The lighting reflected of the water and the water itself is definitely worthy of note and I hope they keep up the great work.

If you love underwater adventure, Aquaman or Namor The Sub-Mariner and other Silver Age feel comics then I truly recommend this comic series to you. It is not too late to jump on board guys!