By: Edward Oliveira | Wii-U Features | June 19, 2014
When Mario Kart 8 came out, one portion of the game that I was excited about was the online, since the Wii U can offer a more traditional online experience. Since launch, third-party titles really took advantage of the Nintendo Network and delivered an experience equal to what I would normally see on an Xbox or PlayStation. This relief had me content that the Wii U would offer nothing but consistently well-made online modes for its games. One problem is that I forgot something: Nintendo’s online experiences. 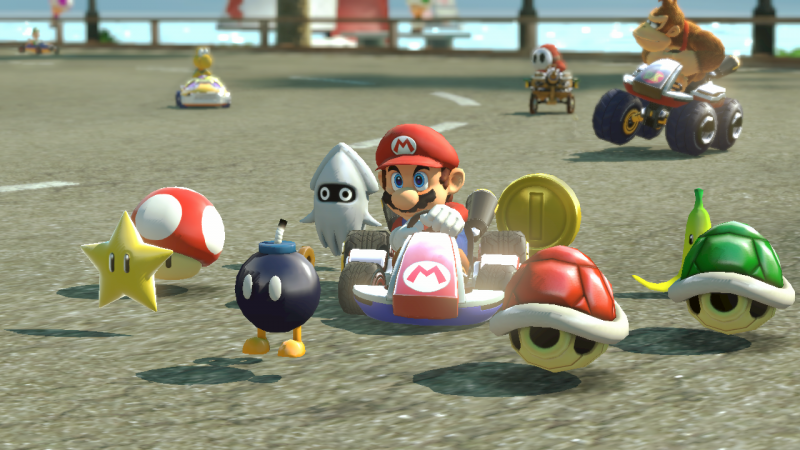 Let me note that the races in Mario Kart 8 have been flawless, with no lag in the hundreds of matches I participated in, so the Nintendo Network is a quality experience in the most important part: the gameplay. It’s just that Nintendo’s games, and the Wii U’s architecture could have made it a friendlier experience.
The problem stands that Nintendo does not treat their online experiences the same as what Treyarch has done with the Wii U versions of Call of Duty: Black Ops 2 (shown below) and Ghosts. And with the aftermath of E3, where Nintendo showed off a few online-heavy games like Splatoon, Devil’s Third and arguably one of the most popular games at E3: Super Smash Bros. for Wii U, we have to ask if these games will be hindered by Nintendo’s lack of giving a damn on its online functions.

The Issue: How Mario Kart 8’s Online Works
I, along with fellow Entertainment Fuse writer Jeffrey Dy, tried out Mario Kart’s online at launch and it was a huge pain to understand how it worked. In order to play with friends, you have to join a host’s lobby, but they would have to wait for someone to just jump in. If you join in the middle of a race (if they were other friends in the party prior to you joining), you watch the race until they finish. The problem is that there’s no voice chat except when you’re in the lobby so no one knows that there’s no notification that someone joined. Want to invite someone? Guess what, you can't. Hell, you can’t even see your friends list since the online modes block the Home button, so you need to chat with your friends with another device if you want to meet up to play it.

Playing with strangers is a bit easier, but a little more limited. The game has a traditional matchmaking system and you vote on a track selected randomly, but there’s no voice chat at all (which granted might be a good think with all my cursing throughout matches, including my races with Jeff). You can also join a tournament, which when you put in the lobby code, which is much like a friend code, where it lets you race people also participating and whoever scored the most points within the timeframe wins.
On a side note, while it was a neat idea to not require headsets by using the GamePad's microphone, its lack of a noise canceler makes it too sensitive as well as make it echoey. Hopefully future games require one.
Nintendo’s E3 Showing and Their Push Into Online Experiences

If this is Nintendo’s standard for a high profile, system-selling game like Mario Kart, will they do that to Splatoon? Splatoon in its current form looks like an online only shooter akin to Plants vs. Zombies: Garden Warfare, but the experience will be crippled if Nintendo keeps this sort of standard up. At E3, there’s been back-and-forth on whether the game will support voice chat during matches, which for a game like this is crucial for strategy. Plus it’s a genre that Nintendo hopes to break into and do it with style, so the lack of voice chat, and perhaps options (it’s too early to tell now), will no doubt make this new and fresh experience unappealing.

Devil’s Third I have the least worries on since the game’s multiplayer trailer showed off a bunch of traditional modes. The multitude of options really make the game feel very Western in design, and since it’s not developed closely with Nintendo, they are just publishing it, I think Valhalla will really support what hardcore gamers want.

However, Super Smash Bros. for Wii U needs a quality experience to accommodate the millions who want to play this online and prove to those with multiple consoles that the Wii U can play just as hard as any other console. I believe the Nintendo Network can support good matches, but the game looks like it’ll have a lack of options available for players to choose from. During the Smash Bros. Direct in April, we learned that the game’s online will have two public options: “For Fun” and “For Glory” and we don’t know whether it’ll support voice chat during matches, nor do I have faith in Nintendo to do so. And what’s worse is that if the worst-case scenario happens is that it won’t support voice chat, I also doubt that they’ll have you chat with your friends except for the lobby much like Mario Kart 8.
We hope that the people consistently asking Nintendo whether there’s voice chat in their games at E3 makes them notice that this is a feature people want very much, and that they should accommodate for that. They should also allow for a ton of customization for people to play online in the same idea that they can at home on the couch. Also, we hope that there’s a way to invite friends playing, or hell, see your friends list while you’re online since I shouldn't have to resort to using my phone to get there. Nintendo has gone a long way and have fixed many of their mistakes in the past, and this E3 proves that with their friendliness towards Twitch streaming and the amazing Treehouse demos, so let’s hope they one-up themselves with some more tradition, modern online system. It can be done on the Nintendo Network, they just need to do it.