Mark Leung: Revenge of the Bitch is an indie turn based RPG made by and featuring Mark Leung, the creator and star of the College Saga web series. The story follows Mark Leung, a communist and ginseng collector as he is caught in a war between two fanatical religions fighting over the creatively inspired world of Untitled. Thankfully one element of traditional turn based role playing games that Mark Leung has managed to recreate is the length which is easily comparable to a Dragon Quest or Final Fantasy game. The story is a mishmash of generic fantasy and quirky internet humor which steals from everything from Star Wars to World of Warcraft.

The game uses both in game cutscenes and FMV cutscenes in order to tell its story. While Mark Leung’s past projects somewhat justifies the game's use of FMV cutscenes, it doesn't work very well in combination with the art style that the game uses in-game. A key feature of the story is the dialogue, which is laced with humor. The humor misses the mark frequently but on the other hand, there are laugh out loud moments when the game references memes and other elements from todays pop culture; From The Kayne West-Taylor Swift incident to double rainbows, nothing is safe from parody in Mark Leung.The story takes a while to get going and you should probably watch the trailer first to see if it is your kind of thing. While it does feel quite clunky to begin with, Revenge Of The Bitch does begin to grow on you after a couple of hours. 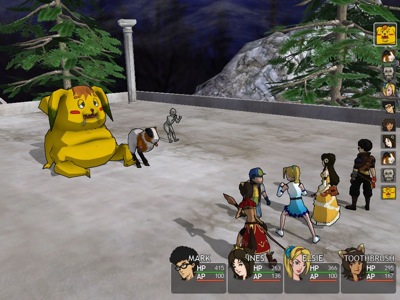 The old school traditional RPG is a genre not often seen on the PC (The most recent examples that I can think of are the Penny Arcade Adventures games) and the game plays surprisingly well. Unfortunately unlike Penny Arcade Adventures, Mark Leung makes no effort to fix the issues with the classic turn based RPG nor does it bring anything new or fresh to the aging genre. The turn based battles can quickly get repetitive and the environments dull due to the story's length.

While gameplay and environments are straight out of a traditional RPG, the game uses a very effective cel-shaded art style for its characters. This is a small thing, but it does help this title stand out, and this was a good move by the games developer. This art style makes the character models stand out and they are easily recognizable, unfortunately the environments are quite bland in contrast to this and they don't utilize the cel shaded look that the characters have been given.

The game uses the Dragon Quest style of random encounters where you wander around the overworld and contact with monsters initiates a turn based battle. Each character in your party has different abilities that can be used in the overworld to bypass, initiate or avoid these encounters.

One key weakness for Mark Leung:ROTB is lack of a soundtrack. While it features some fairly average sound effects, the lack of a soundtrack really hurts the game as it can make the games varied and colorful environments seem very desolate.  The voice acting that isn't very good but suits the tone of the game.

The vast world of Untitled features a very limited form of fast travel via magical sofas which double as save points. Due to the rarity of these magical green sofas you will be forced to do a fair amount of backtracking which can be frustrating because of the respawning mobs that inhabit the world.

Mark Leung: ROTB also suffers from some terrible technical issues. It frequently wouldn't play the audio for characters during dialogue, and it also featured some fairly frequent graphical issues like missing textures and the like. Another technical issue that plagued my play-through was the way that the camera sometimes flipped out during interior environments. While these incidents are small and most of the time not game breaking they do add up, and could easily mar the experience and lead to many incidents of rage-quitting.

In some ways, Mark Leung: Revenge of The Bitch is a callback to the old days of traditional RPGs inspired by modern internet culture and its unique flavor of humor will appeal to fans of Mark Leung’s previous projects, but it lacks polish, is not very approachable and it doesn’t do anything particularly new or innovative for the genre.

Its a tricky game to recommend so If Mark Leung: Revenge of The Bitch sounds like a game you might be interested in, then I suggest you watch the trailer and check out the demo in order to make up your mind about this one-of-a-kind game.