Marvel and the NBA in a True Team Up

The latest Marvel team-up is upon us and it's not in the pages of Marvel Comics--it's in arenas and sporting goods stores across North America! Marvel Entertainment, LLC and the National Basketball Association today announced a collaboration to launch an exclusive collection of co-branded merchandise featuring NBA team logos alongside some of the most renowned Super Heroes in the Marvel Universe. We sat down with Michael Jerchower, Marvel's Director of Licensing, to get some additinoal info and background on this colossal collaboration.

"Co-branding is an important part of Marvel’s consumer products licensing strategy," Jerchower explained. "It allows Marvel to expand into new channels of distribution.  As examples, we have co-branded product with Harley Davidson, Reebok, NYPD and FDNY. Sports is a key area where we saw a huge connection. The NBA is all about tremendous athleticism and super hero-type abilities on the court. This ties directly to the powers of our characters.

"The Marvel Consumer Products team contacted the NBA in early summer 2010 about establishing a co-branded partnership," Jerchower said. "The goal was to identify a few key categoriees that we would jump start the merchandise program with, and we are leading off with apparel from C-Life and headwear from New Era. The co-branded merchandise will make a big splash at the NBA’s upcoming All-Star game at the Staples Center in Los Angeles.

"NBA-Marvel co-branded product provides Marvel the opportunity to gain access into the sporting goods channels and NBA arena stores," Jerchower added. "For the NBA, partnering with Marvel allowed them to tie into a premiere entertainment property with a similar age fanbase. A five-year-old going to a Knicks game may not have developed an assocation yet with the team, but if he sees Spider-Man in Knicks colors on a t-shirt, that’s a slam dunk, must-have for him." 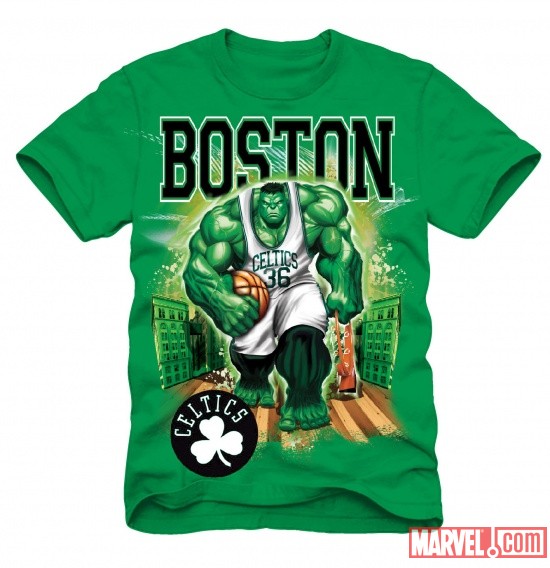