From mall-rat to vampire, it's time for everyone's favorite Chinese-America girl from the Valley. She's known for her love of rollerblading, gymnastics and has been a member of the X-Men brand for years. She's young, fun, bubbly and sassy to boot. She is the one and only Jubilation Lee. But what is actually good about Jubilee?

When Jubilation Lee was a little girl, she was born and raised in Beverly Hills California. When she was young she was a gymnast, with skills of Olympic proportions. In the mist of being a success her parents were murdered, thus making her an orphan. Hating the orphanage and with nowhere to turn she flees to her second home, the mall. While hiding at the local mall she discovers that she has the mental talent to create fireworks from her hands. With her new found talent she hustles by entertaining customers until the mall's security tries to shut her down. But alas the mall's finest is no match for Jubilee's sassy ways and the M-Squad is called to do work. 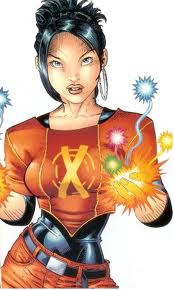 After being captured, she is eventually rescued by X-Men members Dazzler, Psylocke, Rogue and Storm who make their exit by leaving through a portal. Jubilee risks it all and follows them through. Once on the other side, Jubilee discovers a temporary X-Men base. While stealing clothes from the X-Men to make he own makeshift uniform see has a run in with Nanny. The two battle and Jubilee defeats her for the most part. Soon sneaking outside the caverns of the base Jubilee discovers Mr. Bad-Ass himself, Wolverine as he is captured by the Reavers. She frees him and nurses him back to health. Once he's well enough. They two escape. Soon they become best friends and make it to Madripoor and whoop all kinds of ass starting with The Mandarin, Matsu'o Tsurayaba and The Hand.

Wolverine shows Professor X how awesome Jubilee is and how her, ever so powerful firework skills make people stare in awe. Soon she's a member of the elite X-family. When Professor X gets the use of his legs back, Jubilee takes him rollerblading. FUN! As a member and unofficial side kick to Wolverine, Jubilee helps kick butt on some classic random X-baddies all over the globe.

Later on in life Jubilee joins a new team in Generation X. The team is lead by Banshee and Emma Frost with team members such as: Husk, Synch, M, Chamber, Skin, Mondo and Penance. Talk about C-List. One misadventure after another Jubilee attempts to step up having had experience in the X-Men. Along the way she leans of the true killer of her parents, Hunter Brawn. When she gets the chance to finally get revenge, she punks out and lets the authorities take him in to custody. The one character motivation she has, now ripped away.

Once Gen–X folds, Jubilee and Skin head to Hollywood to become actors. Her careers goes nowhere and then gets enlisted into Banshee's militaristic X-Corps. While running around in Paris she slaps around the Blob and Mystique. More missions take place and Jubilee slaps around more C-list Marvel villains until she realizes it's time to take a break and stay home in LA with her Aunt Hope, in a mansion. But not even that last forever as Wolverine shows up for a visit and off to adventure they go. Then she thankfully looses her powers after M-Day, but that doesn't stop her from kicking butt! Nope she joins the New, New Warrirors and defies Tony Stark by not registering to fight crime! In the "Curse of the Mutants" storyline she becomes infected with the bio-engineered virus by a vampire suicide bomber. Thought to be lost, she is taken to the X-Mason where her number one homeboy of all time, Wolverine shows up and she bites him!

As a whole Jubilee is a character that should never have been created. Blame falls on Chris Claremont and artist Marc Silvestri. A mall-rat? My God...Power wise, she's a has one of THE dumbest mutant powers in the whole Marvel U. She has the power to generate bright bursts of multi-colored energy plasmoids from her fingertips. Huh? What? She calls them “Fireworks” to dull the lameness of it all. In 2004 Marvel finally put Jubilee in her own book written by the "Walking Dead" master himself Robert Kirkman. It ran for six issues before Marvel pulled it. But don't worry it looks like Wolverine showed up on number six. Then there is a four-shot called Wolverine and Jubilee gracing the shelves of your comic shop now. It only takes one of the biggest characters in comics to help her sell books. There have be tons of versions of Jubilation but none high quality. She's been here, ther and everywhere, but really hasn't done anything. If she is you're favorite character, then I'm sorry. If you think she should just die, then we are friends forever. 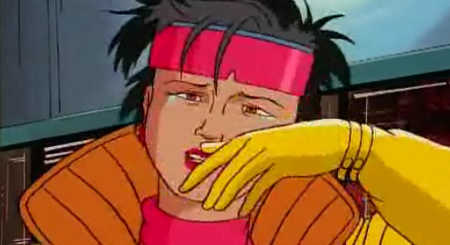