When you think of Rulk, one name and one name only comes to mind. No it’s not Bruce Banner, The Leader or the Abomination (Although that is a word associated with Rulk a lot), no its Jeph Loeb. After a very successful run of Hulk books that included Planet Hulk and ending with World War Hulk, Marvel gave newly contracted Loeb the go ahead to screw up everything Hulk and make this reader hate it even more than Brand New Day. After finally making the Hulk somewhat intelligent and putting Bruce and Hulk in symmetry with each other, Loeb came along and threw all that out the window.

He started a two and a half year mystery, which if I may sidebar, should have only taken two years if he hadn’t missed so many deadlines (I guess it’s really hard to get paid to write). What was the mystery? Well the Red Hulk’s first appearance says it all, “Who Is the Hulk?” Let me answer that question for you right off the bat so that you can never worry about it again. The Red Hulk or Rulk as I like to call him is none other than General Thunderbolt Ross, the longtime nemesis of Bruce/Hulk and father of Betty Banner (She-Rulk, sad I know). 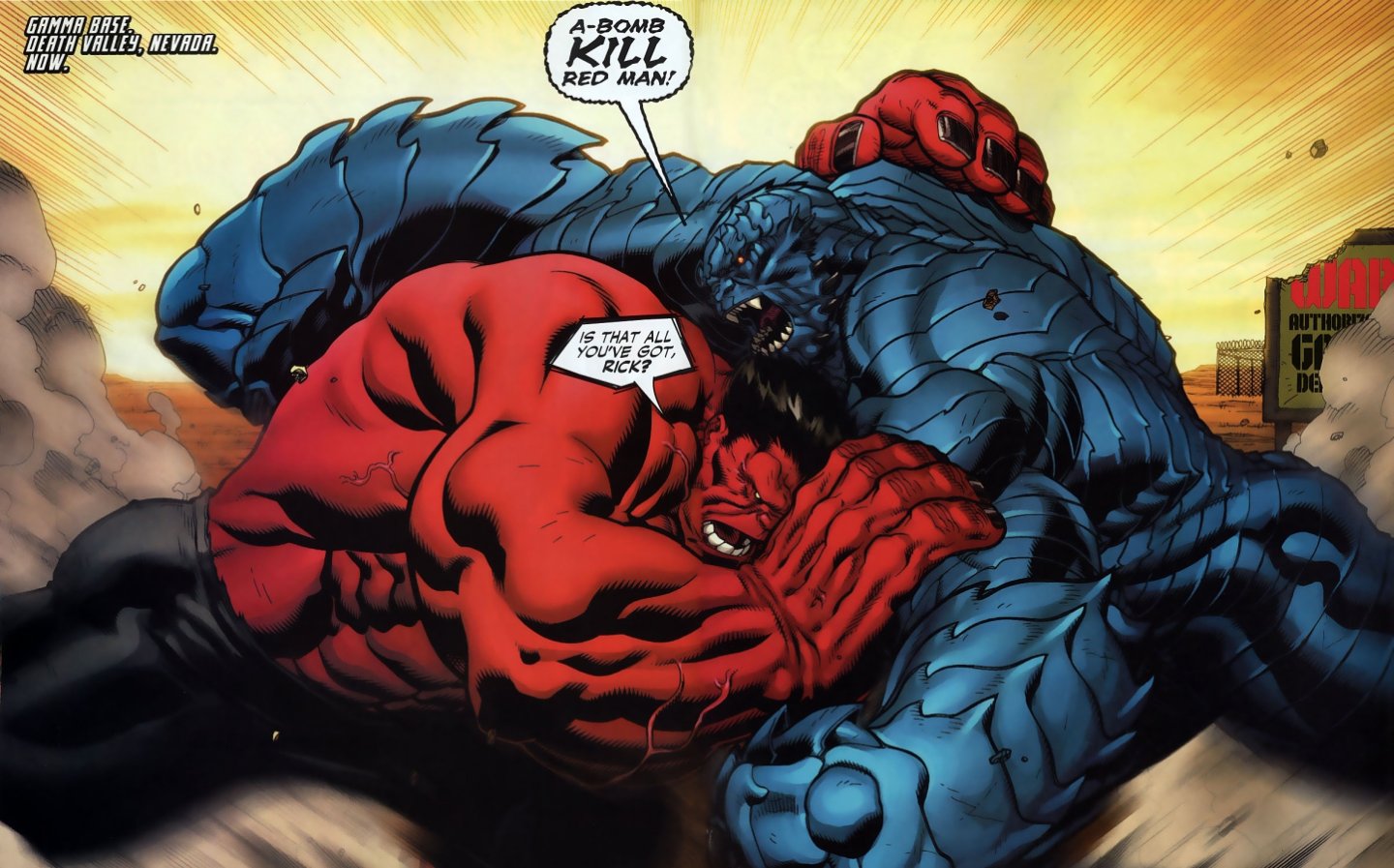 But you know what? I don’t think he’s Rulk at all. Why you ask? Because Jeph Loeb pulled a Twin Peaks and made it up as he went along. If you actually sit and try to figure out the clues you’ll come up with… whoever the hell you want because the clues don’t point to anyone for more than a minute. The gist of it all is that the Leader, MODOK and Doc Samson teamed up with each other to create a Hulk that sucks energies such as gamma from other people to “Hulk out.” That’s how supposedly Rulk can go toe-to-toe with Bruce/Hulk because he can drain his gamma while they fight. Until Bruce found a way to turn this off and now he just kind of super sucks.

Some people love Rulk due to his sucky nature, but personally I find the character to be almost as useless as Rick Jones as the new blue Abomination or "A-Bomb" if you will... I will not. Supposedly the scenes in the series where Ross and Rulk show up together was intentional and that Ross is a life model decoy, but you could say that about anyone really when you’re just throwing darts and picking whoever to be Rulk. The most amazing sequence in all of comics was the reveal of Rulk as he switched from his human form and magically his mustache disappeared. After all gammas only affect the hair above your nose; so eyebrows, side burns and the top of your head are never affected.


The main issue fans and I have with Rulk is that he’s horribly inconsistent with his powers (not just his red herring identity). Sometimes when he gets madder he’s stronger even though he’s supposed to be exhausting heat energy instead. That’s how his power works, he’s got a build of gamma and when he’s out he’s back down to Ross again. Other times he’s strong enough to beat the Watcher (which how the hell did he even know about the Watcher?) and Thor. At the time Thor had all of Odin’s power meaning he was an ultimate bad ass; so let’s do the math Rulk can beat Thor. Thor can beat the Sentry. Sentry can go head-to-head with Hulk but not beat him. Hulk can beat Rulk… by this logic Thor should be able to beat both of them and yet he lost to Rulk. I think everyone can agree that Rulk is as powerful as Loeb was willing to make him at the time and so long as people got pissed off and bought the book, he didn’t care.

Rulk currently is appearing in the regular Hulk series where he’s pretty much taken over and ruined the book for anyone that actually liked the character that Greg Pak had developed and nurtured. Since that wasn’t enough he’s also currently ruining the Avengers by Brian Michael Bendis and Romita Jr. but that book was already pretty bad so it was just more shit on the pile. If you want more Rulk fear not because with issue 30.1 of Hulk a new Rogue’s gallery is introduced for him. I thought you had to be a good guy to have a Rogue’s gallery and Rulk shoots people with a big gun… thanks Jeph Loeb for unleashing this creation-suck on the world of comics.


The biggest problem with Rulk is that it feels like a character a thirteen year old boy would create. Every time some sense or reason was made of his powers they would break the rule and so “no, no, no that’s intentional.” Marvel makes the excuse saying that everything that Hulk is, the Red Hulk is not. Green changes into human form when knocked out; Red stays in Hulk form when knocked out. Everything about Rulk is convenient and basically created to have kept his identity a secret for as long as possible and drive sales. Well Marvel you just turned one of your oldest and most interesting characters in a gimmick… great job! And always remember, Rulk doesn't get mad... he gets heated!