Marvel Names Infinity As Its Next Big Cosmic Event

For the next Free Comic Book Day, Marvel Comics will be offering Infinity by Jonathan Hickman and Jim Cheung as a prologue to a cosmic event of the same name set for later this year. It will feature a new story to set the stage for the upcoming event as well as a reprint of Thanos' first appearance. 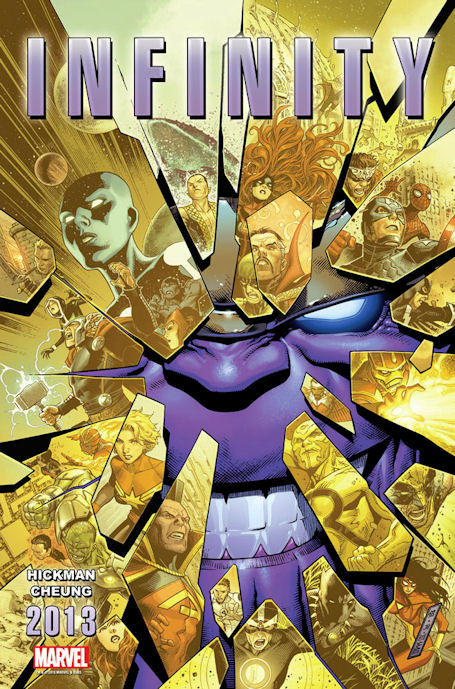 Okay, okay. So it's a big cosmic event starring Thanos with Infinity as the name. I think we can all agree that Marvel loses points for originality there. This is possibly the most overused premise for a cosmic event from Marvel.

That doesn't mean it will be bad. Sure, half of the previous events of a similar description have been and the Thanos Imperative was a trainwreck of epic scale. But this one... this one...

Look. I really want to like Marvel's cosmic books again. So if I'm about to be crushed by disappointment, please just leave me tied down to the train tracks with a blindfold and a smile.

Details on what Infinity will actually concern are yet to be revealed, but it promises to tie together Hickman's Avengers with Guardians of the Galaxy, Nova and likely Iron Man. Hickman has already incorporate some major cosmic elements in Avengers and New Avengers with the new Captain Universe and Smasher as well as the Illuminati actively using the Infinity Gems. Given the event's title and antagonist, I'd expect those gems to be a serious factor.