Marvel News: One Of These X-Men Will Die 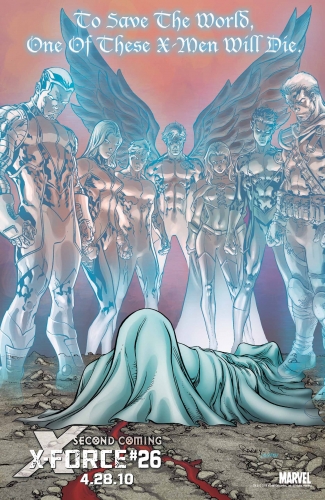 In the upcoming X-Force #26, Marvel is going to kill an X-Man to save the world… How nice. According to the ghostly image, one of the following X-Men under the sheet is dead. But which one? Well lets break it down. From left to right we have: Colossus, a woman with no distinguishable features to make her stand out, Iceman, Angel, Emma Frost, Nightcrawler and Cable. I’m going to rule out Colossus right off the bat due to the fact that he just returned. Emma’s in future publications so she’s out too.  There’s nothing interesting happening with Iceman or Angel, but I doubt their going to go for either founding member. Angel is the only character that’s on X-Force so he has a chance of dying. I still doubt it because they love screwing him over too much to get rid of him altogether. So, we’re left with three. Personally, out of the three I would love to see Cable go. That’s one less check Marvel has to write to Rob Liefeld each month and I’m really tired of his character. Also it would be the biggest catalyst to the story since he’s the only one that has a connection to Hope. Still let’s look at the other two. Nightcrawler, hey maybe he has a real problem with all the murdering the X-Men have been doing so maybe he’ll die for their sins. Lastly, is the woman that really could be any of the damn X-Man, since she’s not instantly recognizable I say that pretty much rules her out. The smart money is on Cable but we’ll see if Marvel has the guts to really do it.