By: Felicia Kudronowicz | TV Reviews | April 20, 2016
This episode of Marvel’s Agents of S.H.I.E.L.D. started out as a rescue mission and ended with another trap and a fallen agent. Even though the title of the episode was “The Team,” everything fell apart. The episode started innocent enough with Daisy’s Secret Warriors on their first mission to rescue the rest of the S.H.I.E.L.D. team. They managed to assemble almost immediately, which was a little unbelievable. Almost no time passed and suddenly Daisy and her team were there even though they were located all over the world. Once they got there, it was straight to business. Elena, a.k.a. Yo-Yo, and Joey took out all the Hydra agents that were already on the plane and Daisy and Lincoln infiltrated the base. They managed to rescue everyone with only minor injuries. Joey killed Lucio (the guy with the goggles) and Lincoln managed to kidnap Malick. Overall it seemed like a successful first mission- the key word being 'seemed.' [caption id="attachment_82281" align="aligncenter" width="600"] 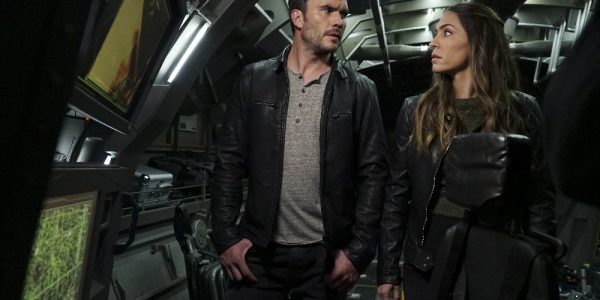 MARVEL'S AGENTS OF S.H.I.E.L.D. - "The Team" -  (ABC/Eric McCandless) JUAN PABLO RABA, NATALIA CORDOVA-BUCKLEY[/caption] After that a number of strange things happened. First, Coulson interrogated Malick about Hive. Malick seemed to have already given up on everything. He spoke really casually and seemed like he just didn't care anymore. He pretty much told Coulson whatever he wanted. He informed Coulson that his Inhuman agents can’t be trusted, as Hive is capable of brainwashing them into doing his bidding. Naturally, Coulson is sent into panic mood. Then another weird thing happened. As Fitz and Simmons were checking over Lucio's dead body, they noticed that his body temperature was still what it would be if he was living. So, they quarantined him to figure out what was happening. The answer was pretty obvious: Lucio was infected by Hive, which they confirmed by a super nasty autopsy. I was with Fitz on this one and I didn’t want to see any of it. The sound effects alone were cringe-worthy. Now that they knew Hive could essential brainwash Inhumans, the team knew they were in trouble. So they tried to figure out a way to contain the Inhumans without them realizing what was going on. That lasted about 12 seconds. Soon Daisy, Lincoln, Elena, and Joey confined themselves in a room and started fighting about who was infected and what they should do about it. Understandably they were mostly focused on S.H.I.E.L.D. turning on them so quickly after saving their asses. Daisy managed to lead them into a trap so Coulson could contain them. Then she figured out that Lincoln had to be the infected one. She reasoned that he knew about the artifact from last episode and Hive sent him to get it. [caption id="attachment_82283" align="aligncenter" width="600"] 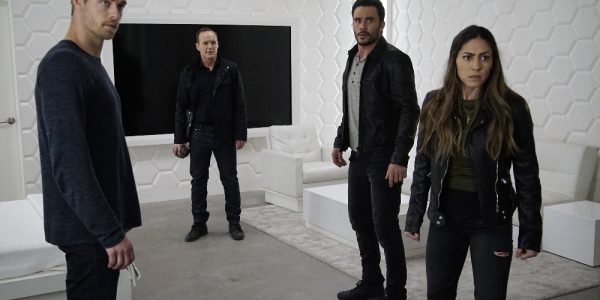 MARVEL'S AGENTS OF S.H.I.E.L.D. - "The Team" - (ABC/Kelsey McNeal)
LUKE MITCHELL, CLARK GREGG, JUAN PABLO RABA, NATALIA CORDOVA-BUCKLEY[/caption] Coulson still put them all in separate pods while Fitz and Simmons tried to develop a test and a cure for this Hive infection. Just when we thought we had everything figured out, Daisy showed up to visit Lincoln in his containment chamber. Out of the blue, she suggested that they run away and immediately Lincoln was suspicious and realized she was the one who got infected while she was on the base hacking their security during the rescue mission. Then they showed a flashback of Hive infecting Daisy. The problem I had with this was that the whole mission Daisy and the team were communicating somehow just by talking out loud and in the flashback she talked to Hive, making it pretty obvious that something happened. So how did the team not hear that? Hive must also have a power where no one can hear his conversations. Daisy also confessed to killing Malick. Lincoln refused to go with her, so they fought and maybe broke up? This was finally a decent Lincoln scene now that his purpose as a scapegoat was finally revealed. Daisy left anyway and took the artifact, the terrigen crystals, and some ammo. Then she locked everyone in the base and caused an earthquake with her powers trapping the group in there. [caption id="attachment_82282" align="aligncenter" width="600"] 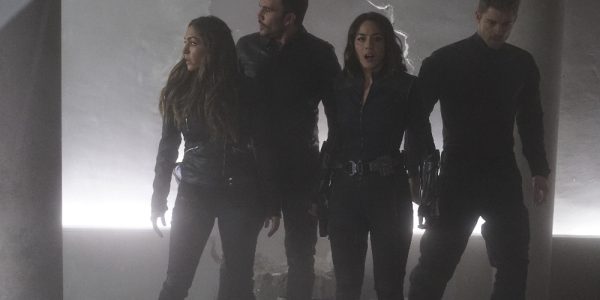 MARVEL'S AGENTS OF S.H.I.E.L.D. - "The Team" - NATALIA CORDOVA-BUCKLEY, JUAN PABLO RABA, CHLOE BENNET, LUKE MITCHELL[/caption] In between all this excitement, we also finally got some Fitz and Simmons action. They had a really sweet scene together and they finally had a decent kiss! Simmons said she’s been waiting 10 years and won’t wait any longer, because they will probably just get cursed again. I hope that’s not foreshadowing. Can we just let them be happy for a few episodes? This season has been so light on the romance. I also loved when Fitz said, “Who needs space, because I've got something magnificent right here." He then joked that he didn’t mean Simmons, he meant his picture of space. It was nice moment to break up the intensity of the episode. Overall, this was a huge improvement over last week. I still don't understand why we needed that Malick backstory, especially now that they killed him an episode later. I am very excited to see what happens next week. According to the previews, Daisy and Ward are reunited at last! I’ve seriously been waiting for this moment. It’s hard to believe they were a couple back in season one, but I was always rooting for them. If they have to be evil together, so be it! With only four episodes left, it will be interesting to see what happens with Daisy as a fallen agent.
Rating
8.5
Pros