Mass Effect 3 has arrived and with it came what would seem like the end of the galaxy. The Reapers have come however the Galaxy is at War and is not giving up without a fight. One of the most controversial issues that came with Mass Effect 3, aside from the issues with Fem-Shep, was the inclusion of Multiplayer. It seemed as though the bug that has been running rampant through the gaming world had finally hit home for me. Do not get me wrong I love Multiplayer gaming, it allows a connection to people and being competitive which is natural for as as a species. But when I am playing a single player game, I want to play a single player game. Mass Effect (the series as a whole) is one of my favorite single player games and placing multiplayer into such a perfect formula seemed to me to be blasphemy. However Galaxy at War is an addictive and well added piece of this formula.

Galaxy at War is a cooperative multiplayer that allows up to four players to battle in areas over such things as resources or getting information that will help with battling the Reapers. You will come across enemies that you fight in the regular game but the difficulty is ramped up to a point where playing with less than three people poses a serious challenge even on the starting levels. You create your own character, with a generic face, sex, and body type however you get to choose the armor, weapons, and class you take into battle with you. You can choose any class you can play within the normal game and you level up in a similar fashion. You then fight through 10 waves (this may vary on some maps) of enemies and every 3 to 5 waves you battle a sort of objective situation where you are required to kill all of a certain enemy within a small amount of time, or get some type of Intel before time runs out. This general formula makes up the entire multiplayer and it is the excellent gameplay that makes it so good.

The more of the multiplayer you complete however the more of an impact it has on the readiness of the galaxy in your single player adventure. This has no impact on the types of endings you can get so no worries if you never want to touch the multiplayer that is fine but you would be doing yourself a disservice. As you complete more levels the readiness meter continues to go up and the amount of reinforcements you take into the final battle with you grows larger, making it easier for you.

If you want to get a feel for these missions they can also be found, in a smaller scope, inside of the single player game. The missions titled 'N7' take place on the multiplayer maps and you fight generally the same types of enemies you would in that multiplayer map online. The last big point of this addition is that as you play rather than unlocking things as you level you may to spend points you earn on Packs, such as the Recruit or Veteran Pack and these unlock such things as new weapons, new character types, even Medi-gel is unlocked in this manner. You heard me correctly you have to randomly unlock the ability to heal, and when you use a medi-gel it is gone permanently. 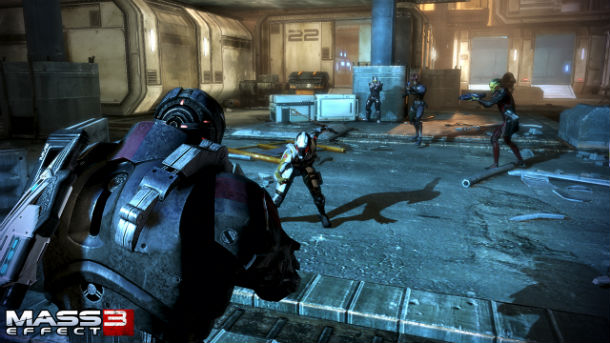 This is a welcome addition to an already stellar series and the only real downside to it is that it was introduced at the end of the trilogy as opposed to the beginning. However we may be seeing more of Mass Effect in the future, this may be Commander Shepards last outing but I feel we will be back in this galaxy again someday.