Mass Effect: The Story So Far

Mass Effect 3 is scheduled to be released in one week, concluding this epic trilogy.  Its developer, Bioware is famous for their epic dialogue and story; for those of you who never played the first two, or forgot what happened in the years since you finished ME 2, here is what happened to Commander Shepard and crew in the first two games.  Obviously, SPOILERS AHEAD.

First and foremost, Mass Effect is about the story of Commander Shepard, who you may customize to suit your requirements. You can change appearances, gender, background stories from his or her past, and Shepard's class: Commando, Infiltrator ect, all offering different biotics and enhancements.

Mass Effect opens in 2138 AD, a period where humans discovered advanced technology on Mars that allowed them to leave the solar system, encounter other alien races and begin the transition to joining intergalactic culture. It's not an easy process; no one trusts the humans, and Shepard must earn the trust of the council, a body of different alien races who govern the decisions made galaxy-wide.

Shepard is tasked with investigating a recovered alien beacon on the human colony of Eden Prime. Shepard heads there with future squad mate Kaidan Alenko and a Turian (another alien race) to investigate the beacon.  Upon landing on Eden Prime, the Turian is killed. This is where we discover Mass Effect 1’s central villain- Saren Arterius, a rogue "Spectre" (A Council agent). Shepard and company witness Saren's evil actions first-hand but the Council does not believe them. At that point, Shepard takes command of the SSV Normandy and must find out what Saren -- and others -- are up to.

Shepard becomes the first human Spectre, and recruits squad mates Ashley Williams, Liara T'Soni, Kaidan Alenko, Garrus Vakarian, Urdnot Wrex, Tali'Zorah nar Rayya. Throughout the game, you make crucial “Paragon” and “Renegade” (Good and bad) plot decisions, which have unknown effects when your character is imported to Mass Effect 2 and 3. These decisions determine who lives and who dies, choices that could ultimately remove their role from future stories in your version of the Mass Effect universe.

You then find out that Saren isn’t your main concern. He is a mere puppet. The real bad guys are a race of machines known as the Reapers - sentient machines who wipe the galaxy clear of organic life every 50,000 years. You also learn that those Mass relays that everyone uses to travel around quicker are built by…You guessed it…the Reapers. 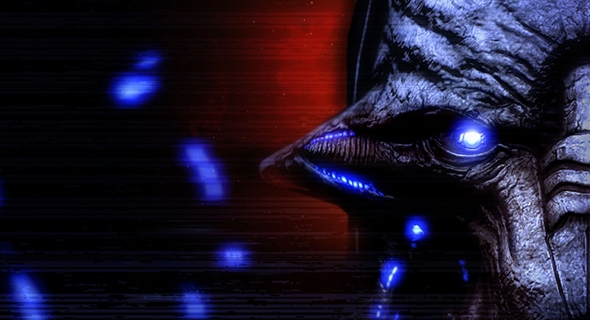 You don’t find out in the first Mass Effect why the Reapers kill everyone. They don’t exactly need to, however, they just can.

During an assault on the Citadel at the end of the game, Shepard is able to push back the Reapers and one of two scenarios plays out, depending on the Player's choices. In one, Shepard lets the Council die but in saving the Citadel, humanity becomes the new galactic leader. In another, Shepard saves the Council and his actions convince the Council of the Reaper threat. In doing so, Shepard earns humanity a spot on the Council. Shepard picks who will take that seat -- Ambassador Udina (who is a jerk) or Captain Anderson (who is cool).

That wraps up the first game, now let's look at what happened in Mass Effect 2.