"An austere and poignant film that should be experienced by all"
By: Russ Matthews | Movie Reviews | June 19, 2017
Maud and Everett Lewis’ story is one that may only be known to fans of Canadian folk art until the release of this latest depiction of their lives, Maudie. Maud's style of painting would have been considered child-like and plain to many, but the profound detail of Maud's work made her a sought after artist from the 1950’s to the 1970’s. People from all around the world desired to own her paintings and even President Richard Nixon commissioned two of her pieces. With all of the fanfare and celebration around her artwork,  the most compelling aspects of their lives could be found in the small cabin in Nova Scotia. 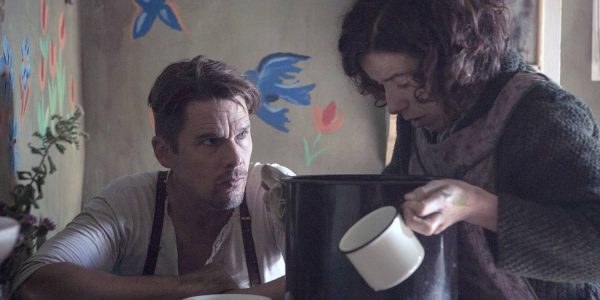 Due to severe rheumatoid arthritis, Maud (Sally Hawkins) found it difficult to walk and do many daily chores. Throughout much of her life, she was dependant on her Aunt Ida (Gabriella Rose) and her brother Charles (Zachary Bennett) for housing and care. Until her elder sibling decides to sell the family home and leave Maud with a key decision. Should she stay with her auntie or to attempt to make a life of her own. Maud answers an advertisement that was put up at the local general store by Everett Lewis (Ethan Hawke) for a cleaning lady. The local fishmonger lived on his own in a one room cottage, which Maud was expected to clean and share in all things, including his bed. Even though it was difficult to live with and work for Everett, he did come around to appreciate this miniature woman as his housekeeper and eventually asked Maud to be his wife. Throughout their life together, she and Everett lived in this one room cottage with no electricity or running water.
In between caring for the fisherman, his animals and their humble home, Maud found her solace in painting. She started by decorating the house with flowers and landscapes, but eventually started putting her designs on greeting cards and small pieces of wood that she found around the property. One day her talents were discovered by some of the local town folk and from there her fan base grew around the world. This change in interest caused the Lewis’ to see Maud's talents as a means of income. But even with all of the notoriety that came their way, they chose to live a frugal lifestyle until their deaths. 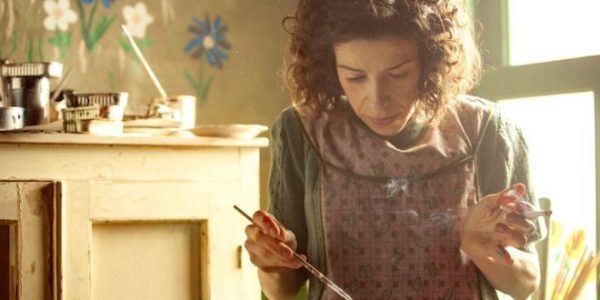 Aisling Walsh is a director who is better known for her television work than for her big budget cinematic productions, but with Maudie she has managed to deliver one of the most endearing films of 2017. Between the fascinatingly simple life of Maud Lewis, the engrossing and understated performances of the lead actors and the unique flair of the folk artist herself, it is an inexplicable joy to watch.
Reflecting the austere works of this pint-sized painter, the performances of Hawkins and Hawke are delivered with a beauty that must be experienced to be fully appreciated. Hawkins physicality and Hawke's masterfully restrained delivery provides the platform needed to develop this charming on-screen relationship. The raw depiction of the Lewises against the beauty of the Nova Scotia landscape is an example of visual style that rivals Maud Lewis' paintings. Aisling Walsh is able to reflect the simplicity and profound nature of the artist's work through this visual marvel. The director is able to show that communication between this couple did not have to be relegated to mere words. The combination of well-planned cinematography and strong physical work from the actors made for a master class in film and acting.
For those who are concerned with the art-house nature of this film, it is worth putting these concerns aside. It is worth taking a chance on a film that should be added to any adult's ‘must see list’ this year. Not merely for the message of understated triumph and hope depicted in Maud’s life, but for the sheer emotional journey it provides audiences. This little film may be different than the multitude of franchise blockbusters available this season, but Maudie will reward all who make the effort to discover this poignant cinematic gem.
Rating
9.0
Pros