With all forms of pop culture there seems to be a resurgence of what was once popular becoming popular again. Usually this time period is about twenty years. This tends to be a long enough time for children to grow up and crave what the loved as a child. Of course the resurgence also opens the door way for new people to enjoy the material even if they have no original connection to it. This leads to monstrosities like Transformers the Movie, G.I. Joe and pretty much anything from the 80’s that was remotely good. One by one everything from previous decades has been destroyed and renewed with complete disregard to core fan base. Well it seems that 80’s have been tapped dry and everyone has moved onto the 90’s, including comics.

That’s where Mediterranea comes in. It’s not a remake but it is very much a comic misplaced in time. Everything about this book is 90’s: The story, the dialog, the art, the overt sexuality of the book. But something about it just w 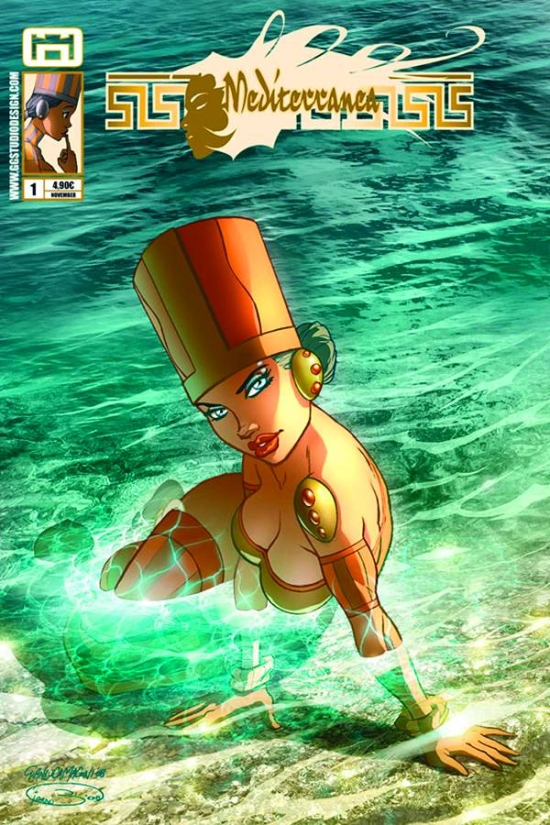 orks. It rare that a book can make you blush, or remind you of the first clean, yet very adult themed comic you every read.

The story follows Alonisso a beautiful young woman that is on a journey with her master to the city of Milos. One night on the journey she has a horrible dream (that more than likely depicts the future) and is so rattled that she must be consulled by her “friend” Eleni. The story doesn’t exactly say it in plain English but it’s very clear that Alonisso and Eleni are partners/lovers. The writer and artist look for every opportunity to have the two women in compromising situations throughout the story.

After finally getting some rest the group make it to Milos where the girls master is going to meet with other delegates to discuss changes between the two races of people living in the city. Alonisso walks her master to his destination while Eleni prepares the next plot point for the story to lead to. Along the way Alonisso’s master speaks of her future and that she must be prepared to move forward and find her path if she is going to be great one day. After dropping her master off, Alonisso tracks down Eleni.

She finds her and the two carry on their way exploring the city. That is until an unknown assailant attacks their floating-robot-camera-thingy. Apparently the camera-thingy was very dear to the girls as Alonisso tracks down the female assailant. The two fight until Alonisso loses her top and is forced to go on the defense. An old man intervenes on Alonisso’s behalf and throws the assailant out the window… too bad she can fly!

The story really isn’t anything special. Chosen one must save the world from a repressed society that is now uprising. The Chosen one’s world is turned upside down as she discovers that the repressed society is actually the good guys, or not. Really these are just guesses but there’s only so many ways the story can go and these seem the most likely.

The art on the other hand is beautiful and make scream 90’s but still is very relevant in today’s market. The girls are gorgeous and scantily dressed, but so is the rest of the society making it at least justified. The pencils have a lot of soft lines but still very detailed. The coloring is wonderful and frankly makes the book a wonder to look at. Everything is bright and sharp giving it an animated look too it.

If this type of book is making it’s come back to the comic market then maybe it’s time. If we could combine today’s writers with this art team then comics would be amazing to look at and read. If you’re looking for something shocking and new though you will not find it in this book, but if you are looking for something familiar and beautiful then give the book a shot. Personally I will be picking up the second issue just for the art and the ridiculous nature of the characters.