It looks like fans of Honey West are getting to chance to meet the co-creator and the actress/model that plays Honey West at Hi De Ho Comics. Check out all the information below and look for our review of the first issue that released this week.

Hi De Ho Comics is expanding. Since 1974, Hi De Ho Comics has had a presence in Santa Monica and August 22st, 2010 will see the opening of their second store in Laguna Beach, California. 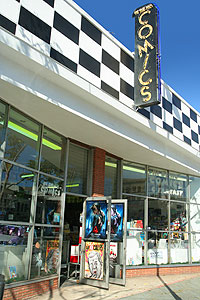 "We are pleased that Gloria Fickling, co-creator of Honey West, our 'Honey', (actress/model) Hollis McLachlan will be on hand to help celebrate their new store AND the arrival of Honey West into the comic book landscape" Moonstone publisher Joe Gentile said "It is particularly fitting since Ms Fickling has a long history with Laguna Beach. Fans will be pleased with the new series, and we are proud to be able to offer something special at this time."

Both Gloria and Hollis will be signing copies of HONEY WEST #1, published by Moonstone, the first ever new adventures of Honey in comic form, from 5-7pm! The ribbon cutting will be done by the Laguna Beach Chamber of Commerce. And there will ala second in-person signing with Gloria and Hollis in Santa Monica, California.