"An Examination of the Trappings of Technology"
By: Steven Armstrong | Movie Reviews | October 21, 2014
Jason Reitman's latest dramedy is so timely that it isn't even funny. It perfectly depicts the current social landscape of relationships today be they familial, romantic or otherwise. There are all sorts of twists and turns and at the end of it all, we are reminded that those relationships, those connections we have are extremely valuable.  We also discover that men, women and children, while they may be separated by age, different beliefs, mannerisms and so forth, they are not so different after all. As Walt Disney said, "Adults are only kids grown up, anyway." Nowhere is that more apparent than in the actions of the parents of this film. The film opens with a shot of space as we follow the Voyager Space Probe traveling past planets deep within our solar system. Funnily enough, the extended opening sequence felt like an add-on of the trailer for the upcoming Interstellar, which had just shown before the start of the film. This sequence initially feels completely unrelated to the ideas the film addresses and actually takes a while to make its point apparent as it continues to be referenced throughout the film. One could even argue that anything to do with space or a satellite space probe could have been totally omitted from the script and the core of the film would still be intact. However, the film does assert its case for the inclusion of such seemingly unimportant things and the result ends up being quite moving and rather thoughtful. 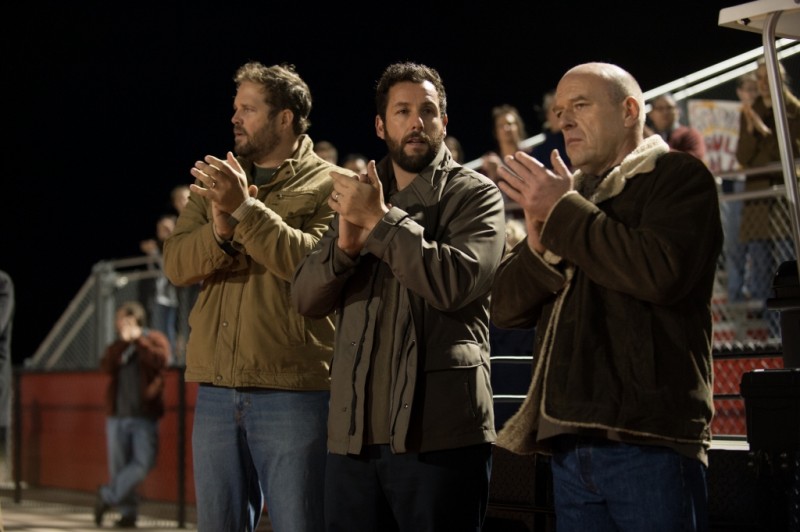 The film examines in a mostly straightforward way the effect that technology has on our relationships these days and how it is used to either enhance or damage not only those relationships with others, but the relationships we have with ourselves. We see married couples turning to the internet in an effort to rekindle the spark they once felt for one another. Children of those parents turning to the internet as a form of escape from their tormented lives. Everything from divorce to bullying to excessively protective parents to unnecessary dieting; these are just more obstacles to escape or manage and the internet has become a kind of security blanket. We also see a mother who uses the internet in an attempt to "help" her daughter achieve success, but ultimately ends up making a case for better parenting, which parents can sometimes forget to provide as they too, can get caught up in their own lives, hopes and regrets. Parents can also act irrationally when they make certain discoveries that they ordinarily would not make without the aid of technology. When such things occur, how do we bring things back to a human to human way of interacting without hiding behind a computer or smartphone screen? This is a question that Men, Women & Children attempts to examine. 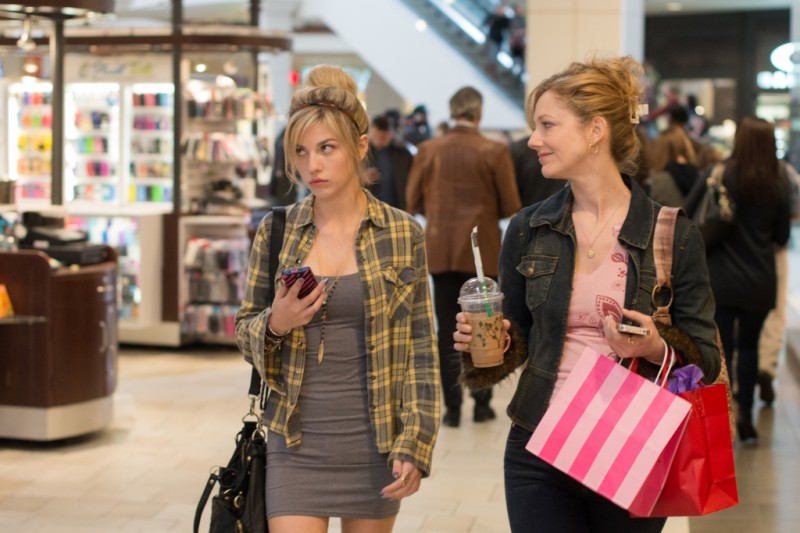 So much of our lives are spent behind some kind of screen and this film does an amazing job at capturing that. An establishing shot of a typical high school is a perfect example. The camera follows a lone student as he navigates through a sea of other faceless peers, who are faceless for no other reason than the fact that all of them have those faces trained down on their cell phone screens. The production design team of this film deserves high praise in the ways that text messages, Facebook messages and chat responses are displayed. To be fair, it isn't anything new. We've seen the same things done in films like The Fault In Our Stars and Chef, but I would argue that the difference here, lies in how integral tech communication is to several scenes in this film. This film has raised the ways messaging and other internet operations are displayed in movies to another level entirely. There is one scene in particular where all of the dialogue is conveyed solely through text messages, while the actors provide various facial expressions and different types of body language that either underscore what's being said or does the opposite. This is just one of the several expertly handled aspects of the film. It is perfectly done; Reitman understands the occasional awkwardness that can occur when engaging in a standard text conversation, not to mention one that leads to the realm of 'sexting'. He and the actors managed to completely fabricate something that feels very non-fabricated. 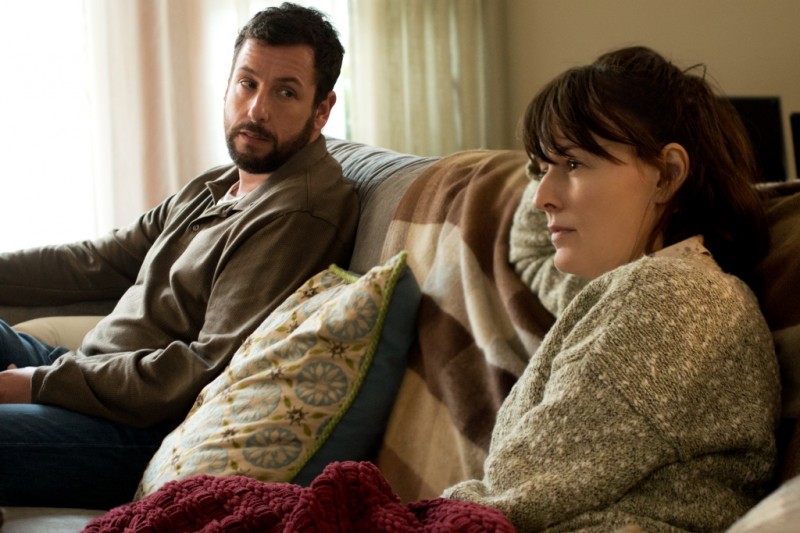 In many respects, the scene feels very much like something from the silent film era in the ways that there is no spoken dialogue. Only facial expressions and body language. During the silent film era, you had only the title cards to lead you into a scene or underscore what was happening. The actors had to do much more work in a way and this scene feels like a callback to that time from the early days of cinema repackaged with more modern sensibilities. The ensemble cast is strong and mostly does good work. Adam Sandler is wonderfully understated here in a role, which greatly departs from some of his other more out-there comedic characters. Jennifer Garner is mostly solid and compelling, particularly in scenes with her daughter played by Kaitlyn Dever. However, she has moments of wooden and almost robotic delivery that takes one out of a scene. Ansel Elgort, who many know from Divergent and The Fault In Our Stars, gives a very good performance as a former school football star dealing with family issues. He is a much more reserved and introspective version of Augustus Waters who, for some reason, fits in much better in this film. Dean Norris was fantastic in a role I have never seen him in, as a lost ex-husband and father who can't connect with his son. He shows great range here. 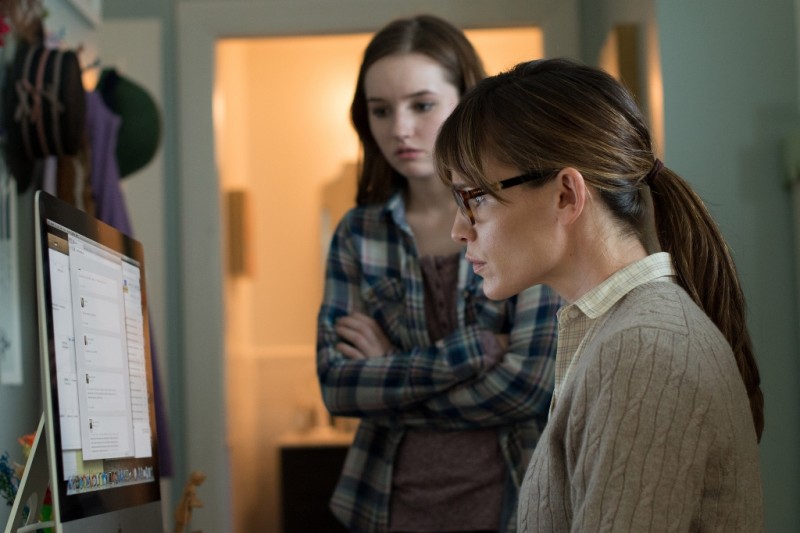 Let's talk about sex. When dealing with teenagers whose hormones are all over the place and adults whose sex lives have been on the decline or is nonexistent, sex will surely play some role. There is tons of sex in this film yet, we do not see any of it, which is appreciated. Not everyone is a fan of sex in films for the sake of sex. There should be a logic to it; and even then it doesn't necessarily mean one wants to see people having sex in a movie that's supposed to be telling a compelling story instead of showing a sexual encounter, which one could find anytime on the internet. Reitman takes us right to the bedroom door and allows our minds to wander. This isn't to say that the film is subtle in its suggestion of sex, because it isn't. Rather, the sex just isn't as overt as it is in many films today. It is not a perfect film, but it is a mostly good one. It is a motion picture that is very much of its time and manages to sneak in, consciously or not, pieces from earlier eras in film. Even if the film's narrative begins to fall apart a bit as it rushes to tie up its various subplots at the end of the final act and the narration feels unnecessary, the film still manages to give us an engaging story, while also giving us some food for thought on how we relate to one another and the funny role that technology can play in our relationships.
Rating
7.8
Pros