Honestly, this might be the best episode of Modern Family so far. It really did have everything. The characters were pronounced, the family was forced to work together, and I cannot count how many times I busted out in laughter. From Mitchell shimmying down a rain gutter in his Spiderman costume, to Gloria trying to ditch her accent so people can understand her better, almost every character has a great line.

The real stars of the episode were Mitch, Cam, and Jay. While Mitchell is dealing with the above mentioned predicament, Cam is beside himself with the pain of Halloween. He apparently had a traumatic experience as a kid, one which is revealed and is as ridiculous as you would hope. He plays the drama queen role well, as he has done in the past, but instead of coming off as annoying, it is endearing and funny. Mitch finds himself in the most awkward and uncomfortable situation of the entire family and while some parts of you want him to find a way for him to get out, it’s just too funny that he doesn’t. 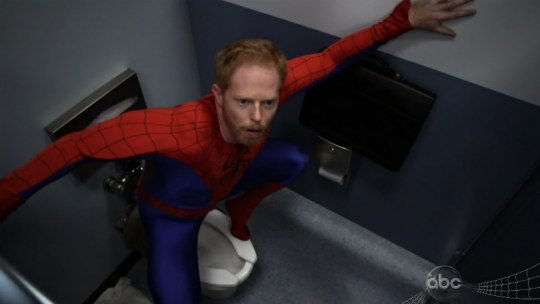 Jay lets it slip that sometimes other people cannot understand Gloria because of her accent. Baby cheeses ended up sounding like baby Jesus, and it’s pretty hilarious. Manny doesn’t help the situation at all, which only leads to Gloria blowing up and over compensating. I loved her slow English dialect, but it does sound weird, especially coming from Gloria.

There is really only one conflict between the characters in the episode and it occurs while they are all in costume at the Dunphy house. While Claire could have come off as whiney and the scene a bit too over dramatic, the fact that Phil and Claire were dressed up like the Corpse Bride and Groom, which is as ridiculous and funny as it sounds, made it a tender moment. Once again, Modern Family shows us that while these people maybe as different as any could be, they are still family and will always pull together when they have to.