I believe this is the first time we have seen a member of Cam's family. His mom comes to visit him and Mitchell and the results are a bit underwhelming. Throughout the show's run we have heard about Cam’s rural family and how Mitchell usually mocks it. I kind of expected more from this storyline... all we were given is inappropriate touching. Yeah, that sounds interesting but it just comes off as weird. Not weird as in uncomfortable, but weird as in a weak storyline. The bath scene is pretty funny and ultimately their relationship is stronger because of it. It was also interesting to see how supportive and accepting Cam's mother was of their relationship. We have to wonder about how she took it when they first met and to me that’s the part we should have been shown.

The Dunphy house was thrown into disarray by Haley cheating on Dylan with her math tutor. Claire was ecstatic about forcing Haley to break up with Dylan, but Phil took it pretty hard. Phil easily became the star of this episode and really drove the story. He was sad to see Dylan go because his “cool dad” persona was thrown into jeopardy. The jacket was by far the funniest element of the episode and it is nice to see Haley act like a real person and not just the stereotypical teenage caricature she usually is. As the kids get older it is only natural that more plot lines involve them and so far the children are showing that they have the ability to carry a narrative. 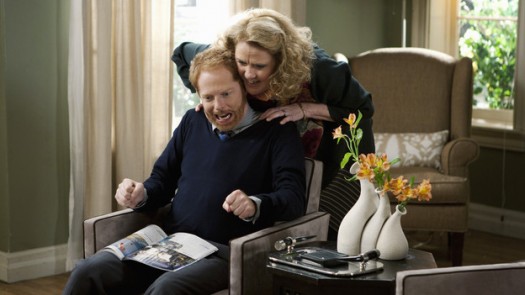 Phil and Dylan hanging out was great and I love the bit about Dylan’s car and how it made Phil feel like he was flying. When he talked about his traumatic breakup from high school you couldn’t help but laugh, yet at the same time feel so terrible for him. I know it isn’t Modern Family’s style to flashback, but I would have loved to see that. I can just picture it now.

Jay, Manny, and Gloria were on their own for this episode and their storyline feels tacked on and not fully developed. The bit about Gloria being too tough for a doctor is great and I laughed a bit when Manny was mini-golfing, but in the end nothing really came of their story. Jay is going through some rather minor surgery but none of our other characters seem to even be aware. Sure it’s only appendicitis but it’s still surgery. Maybe next week they countinue the story with the whole family in the hospital, but bearing that these three just didn’t have much to do this week. I have mentioned in the past that Modern Family’s large cast can sometimes be a negative on the show, and this week illustrates it perfectly. While it was not a bad episode of television, it is on the lower end of Modern Family episodes.