Following in the footsteps of Gears of War 3 and Kinect Star Wars, Call of Duty: Modern Warfare 3 will also have its own special edition themed Xbox 360 console.  Microsoft and Activision announced that the console will have a 320GB hard drive, which, along with the Gears of War 3 and Star Wars console, will be the largest hard drive for an Xbox 360 to date.

Officially labeled the Xbox 360 Limited Edition Call of Duty: Modern Warfare 3 console, the bundle will include two controllers, a one-month Xbox Live Gold subscription, and a standard edition of the Modern Warfare 3 game itself, all for $399. The console will also have custom sound effects when the user turns the system on/off, and opens the disc tray. The bundle will release on November 8th, which is also the launch date for the game. 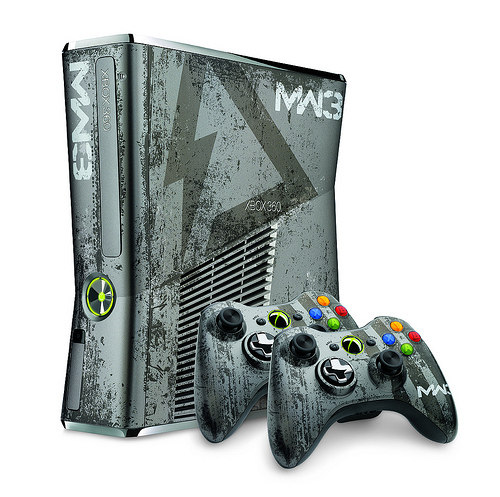 If this is still not enough for Modern Warfare 3 fans, a themed Bluetooth wireless headset will also be available, sold separately for $70. The themed wireless controllers will be available separately on October 11 for $60 each, for those who can’t wait until the bundle launches in November. Both the headset and controllers will include codes for yet-to-be-announced downloads.