Summer of Arcade 2010 has featured a lot of really strong XBLA titles so far. This year's line up is a nice balance between new takes on established franchises and completely original properties. Original properties like this weeks release from Uber Entertainment. Monday Night Combat is a class based third person shooter set in a goofy stylized future where the masses tune in to watch human clones duke it out in an arena. It comically spoofs gladiatorial combat while offering a satirical take at our own professional sports.

Players fill the rolls of one of six preset character archetypes. Each class features a distinctly different play style than the others. There are no surprises here though... The Assault class is quicker moving, versatile player while the Tank class is a slower type that can take more punishment. It's all pretty basic but it makes finding a character that suits you own preferred style very easy. If that isn't enough, there is a create a class feature for players looking for complete control. 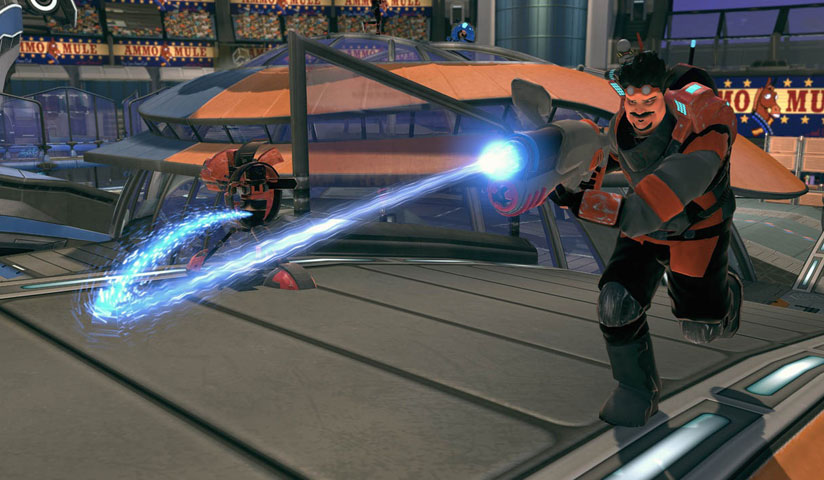 The overall objective of each match revolves around an object called a Moneyball. Your team's Moneyball is basically your home base. It's stationary, valuable and critical to defend. Destroying your opponents Moneyball means you win the match and vice-versa. What stops enemy players from simply walking up to your Moneyball and destroying it is a special shield that can only be lowered by enemy robots. Computer controlled robots will spawn in each base and slowly move toward the opposite one. It becomes insanely important to deal these robots. Finding a good balance between destroying mechs and pursuing enemy players is a lot of fun. The matches all feel very alive thanks to the wide variety of things to shoot at.

There is a huge emphasis on money in Monday Night Combat. For good reason, cash does everything but pull the trigger for you. You use it to upgrade skills, buy turrets for defense, and your overall ranking for each match is measured by how much you line your pockets with. All the money you bank in total is tracked and can be spent on special tags and upgrades when creating your own special class. There is tons of replay value here if you are OCD enough to unlock everything.

The theme is probably my favorite part of the game. It's so over the top and ridiculous and it's also the biggest reason not to just write MNC off as a Team Fortress 2 clone. Fans packed into tiny stands all screaming for carnage, excessive commercialism plastered all over the stadiums, jiggly cheerleader/pit-girl-- It's completely silly and it works amazingly well. The announcer character is a pretty hilarious guy and will chime in with realistic quips whenever you do something interesting.

Where Monday Night Combat falls short is when it comes to actual diversity in gameplay. There are only two different game modes available in the entire release. Blitz mode, where players set up defenses around a Moneyball and try to outlast waves of assaulting robots-- and Crossfire mode, which is a team based online versus mode where players try to overcome the enemy's stream of robots and take their Moneyball, all while defending their own Moneyball from enemy players trying to do the same back. While both modes are a ton of fun, the lack of variety could put a strain on some people's attention. Crossfire and Blitz might start getting stale after a while since only one of the modes actually pits you against other players.

Overall, Monday Night Combat is a pretty great value for its $15 price point. The online play is addicting and the theme is ridiculously fun, however diehard shooter fans might get bored after a while if they are used to more game mode options. It's probably the silliest game in this years Summer of Arcade and is worth checking out.