Frank O’Connor, the Halo franchise’s development director, revealed some minor details regarding Halo: Combat Evolved Anniversary’s Kinect functionality. Players will be able to switch between graphic modes, by saying either “Classic” or “Anniversary.” O’Connor wouldn’t delve into too much detail about the other Kinect functionality details, but was quick to note that it “is not core to the gameplay… but it is germane to the story and fiction fans will probably really enjoy that feature.” Expect more details to be revealed in October. 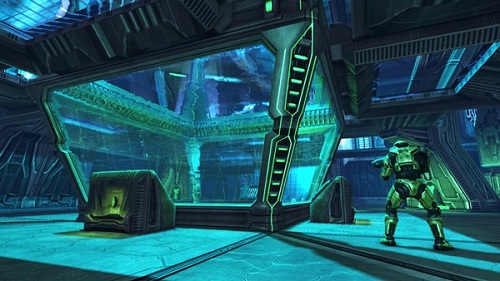 Besides Kinect, O’Connor mentioned the role that Terminals play in the game. As Halo fans might recall, Terminals are Easter Eggs from Halo 3 and Halo Reach that provide the player with backstory to the Halo universe. For Halo: Combat Evolved Anniversary, Terminals can only be found while playing in “Anniversary” mode. O’Connor noted that “We're not going to make them crazy Easter Egg difficulty to find… We want people to enjoy the story and get more out of the game.” As expected, playing through the game on a harder difficulty setting will make Terminals harder to find. The Terminals will also function as teasers for the upcoming Halo 4, providing players more incentive to play through on “Anniversary” mode.