If you’ve been following Morning Glories then you should have figured out that each issue is following one of the six main characters. I can’t say that they’ve all been very interesting, but there have been stand out moments like Hunter’s issue. Issue #10 follows Jade, who is having a hard time adjusting since being freed from the Nurses office. She continues to have strange horrific dreams that wake her in the night screaming. Screams so loud that the night security arrives and lingers in the girls rooms. After the guards threaten to take Jade, Casey tells them to politely piss off since she’s sure they would have already taken her if they could.

The night settles down and Jade drifts into another dream with a strange man that seems to know her quite well. The next morning she gets ready for class only to come out of the shower and discover Hunter in their room. He’s explaining to Casey about why he missed their date and she’s very understanding, but she still tells him that it’s better that they remain friends. Hunter notices Jade standing in her towel and uses the moment to excuse himself from the room. Once in class the teacher begins to demonstrate a hangman’s noose to the students and asks for a volunteer for the demonstration. Jade double checks with Casey that she’s not still in a dream, once it’s confirmed that she’s not she quickly volunteers much to Casey’s protest. 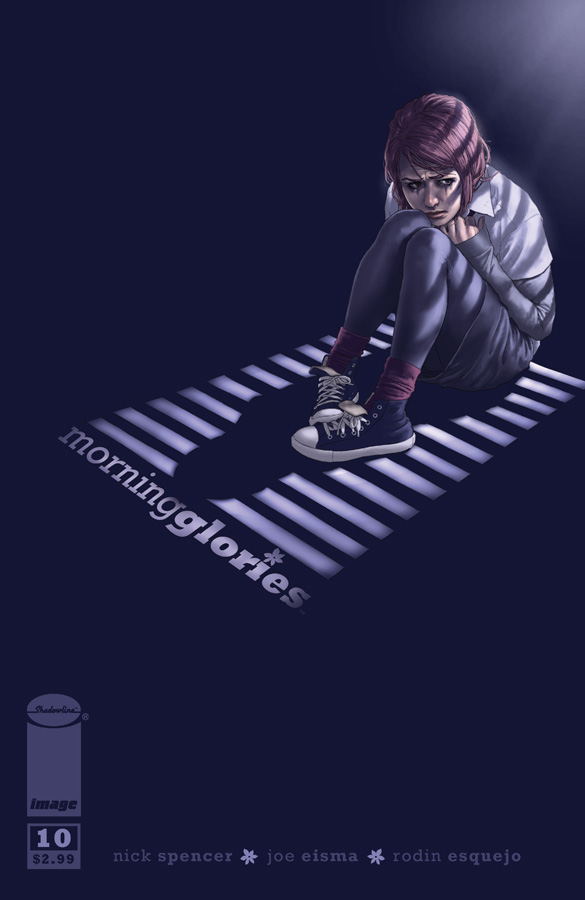 This issue is one of the better single character issues thus far. It doesn’t top Hunter and his inability to read the correct time on a clock, but its damn close. Jade has consistently been one of the more underdeveloped characters so it’s good to see that she’s being used more and also plays a key role in the overall story. There are parts of the story that have haven’t recapped that truly make the issue great and return the series to the same intrigue that it had with the first story arc.

Nick Spencer tends to be hit-or-miss with me personally, but this issue is definitely a hit. The characters feel more organic within the story and they are starting to have their own unique voices instead of sounding like the same teenager in a different mold. Spencer’s writing style still isn’t as fluid as it is on other series like Thunder Agents, but it is improving. Hopefully he won’t let him writing duties at Marvel let the quality of the series drop.

Joe Eisma’s art improves a lot with this issue. The backgrounds are richer and fuller and intentionally devoid of life as we walk through Jade’s dreams, but they never lack detail. Also Jade’s hair is noticeably longer as if to give a sense of time that has passed… at least for her. I’m alluding to something there that you’ll understand upon completing the book. In general Eisma’s art really stands out this issue. There’s a great scene with Casey and Jade in which Jade simple gives her a look that invokes a response from Casey. It’s probably the best scene in the issue.

I struggle a lot with this series, but I can honestly say that I really enjoyed this issue. It renewed my interest in the book and actually made me look forward to the next issue. Jade’s story line is increasingly more and more interesting and hopefully after the last character issue in the arc, we’ll return to her and her story for more closure. In the meantime, if you’ve been enjoying the series (which the sales say you have) then rest assured that this issue continues to be just as good, if not better than the rest of the series.

Overall Score – 8.8/10
*Not the best place for New Readers, but you’d be able to manage if you start here*