Morning Glories #23 Advanced Review “Where are Answers to the Main Mystery?” 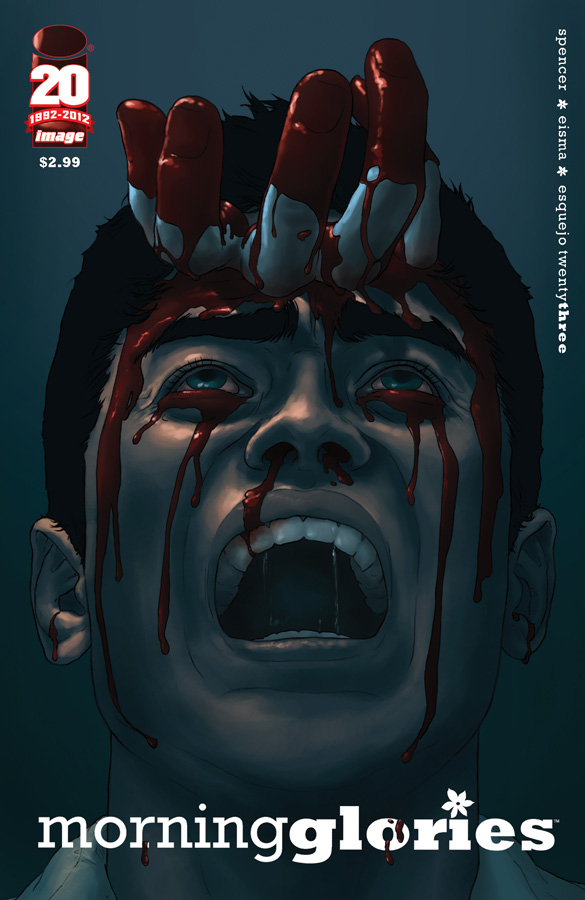 The cover for this issue is great. The art is amazing as always, and the concept explains exactly what happens.

This issue was all over the place. We jump from the past to the present to “help” us understand why Akiko wanted Hunter to go to the ruins. But it just made everything more confusing. There are random ghosts, Jun gets attacked by a ghost, and Akiko escapes a jail cell. What does this have anything to do with the first cast of the Morning Glories book. Ever since the second cast has been introduced everything has become more confusing. We haven’t seen Cassie, the main character, in at least five issues. I want some answers on how everything connects to the bigger mystery. I am sure we will receive these answers eventually, but for the readers following this series issue by issue will we be kept entertained with the random “clues” we have been receiving every issue that doesn’t give us any revelations.

I didn’t think this issue was all bad. The ending keeps you curious. The story starts to connect with the first Morning Glories cast, but does not center around them. The need to learn how to balance the two casts. Maybe show the first cast in one issue and the second cast in the next than connect both of them within those issues.

The art was great as always. I love the style of art they use for this series. It is so simple for a mystery series. Most mystery series like using very dark and gloomy art. I am glad that Morning Glories strays away from that, and actually uses light and simple art.

I thought this issue had way too much going on. Even though the cliffhanger keeps you interested. Nick Spencer needs to organize what clues he wants to give us in each issue. That way the readers feel like they are getting closer to answers to the main mystery instead of feeling like with every issue they are getting further away. This series would probably be better to collect in trade. I still like the series, but it is a series better to collect in trade than to read issue by issue.