Morning Glories #24 Advanced Review “Why is Ike not close to his father?”

The cover for this issue is great! I love Morning Glories’ covers. It always gives you a little information on what the issue is about, but also has some mystery to it to keep you intrigued. The covers for this series are probably my favorite cover artwork for a present ongoing series.

Ike and his father’s past is explored. Did they have a good past with each other? After this you will understand why Ike acts the way he does.

This comic was delayed for a couple of weeks. This made the story have more hype in my mind. I didn’t want to be disappointed after I waited patiently for the next Morning Glories story. 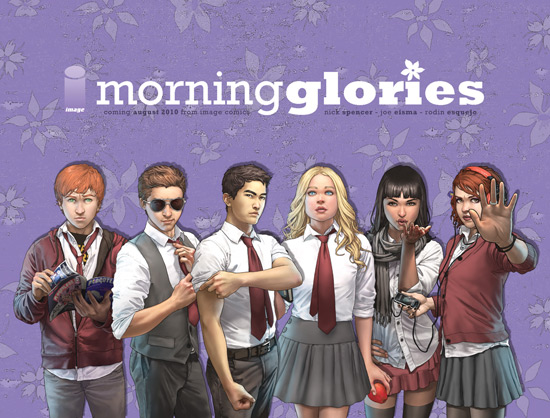 The story centers on Ike and his father. Their relationship has not been explored in the past. It was only a couple of issues ago that it was revealed that Abraham was Ike’s father. But we never knew if they had a strong relationship. One of the many mysteries in this series is to find out exactly who Abraham is.

The reader feels rewarded when they finally get some answers to a mystery that has been lurking around in the series for a while. We see exactly how Abraham’s absence affects Ike. The father kept saying that he wasn’t around because he wanted to make a better life for his son. But at the end of this issue we see that this is not true. Abraham might have other motives that don’t include his son.

This series loves biblical references. In the past they had a whole issue dedicated to the Tower of Babel passage and in this issue they reference Isaac and Abraham. The two main characters in this story are referenced as Abraham and Isaac from the Old Testament. Abraham believes that Ike should have faith just like Abraham has faith in God.

I am glad they made this reference and always like seeing biblical references in certain comic books. I hope they do this more in the series, and very curious to see if Abraham and Ike’s relationship will follow the same relationship Abraham had with God and Abraham has with his son.

The ending of this story leads us perfectly into the season finale for issue 25. It seems like we are going to finally get answers on why our main character are at Morning Glories Academy, and exactly what Abraham’s motives are. What makes the Morning Glories students so special?

Not everything was perfect with this issue though. Ever since the new group of students came into the story I have felt that Morning Glories has been a little disorganized. Nick Spencer could unravel the mystery in a more organized way through out the series. Some issues have too much mystery to the story that it can actually get confusing to the reader who is not reading the story in trade. It needs a balance. Especially if the series is going to be delayed, the reader may forget exactly what happened in the last issue. I just hope everything comes together in the end.

The art for this series is always great. I love how simple it is even though the story can get complex at times. It is a great balance.

I am excited to see where this series goes. This issue is leading up to something bigger for Morning Glories #25. Pick this up!