Morning Glories returns with a brand new story arc and a place for new readers to jump onto. The story opens up with a man named Andrew in a very poor part of India. He’s come to find an extraordinary child and isn’t disappointed. The young girl will grow up to be Zoe, but in the meantime she’s already learned English just by Andrew’s presences. Since Zoe is an orphan he has it arranged for her to be taken to America and put with a particular family.

Flashing forward to the present, we find Zoe and Casey alone in their room. Casey asks what Zoe’s problem is and Zoe answers her by going off. She chews Casey out for not trusting her enough to include her on the fine details of her rescue mission and storms out of the room. While walking she comes across a team of cheerleaders practicing. Zoe can’t believe that this screwed up school actually has a cheer team. As the practice lets out one of the girls catches up with Zoe and begins talking to her. 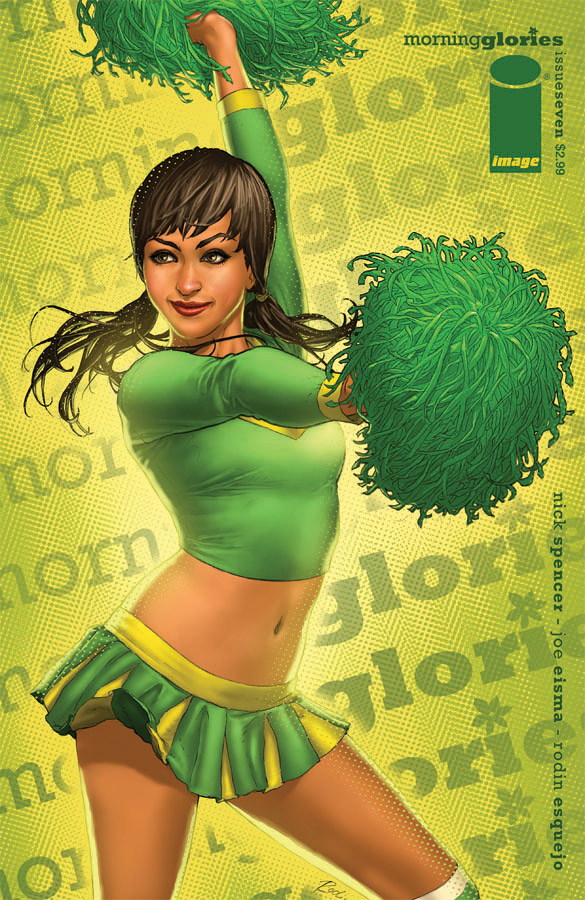 A flash back begins of Zoe at her previous school practicing her cheers with her friend. One of their teachers comes in and chews her friend out saying that she needs to be working on her report not kicking her legs in the air. We’ll come back to this flashback later as it continues. Back at the academy Zoe and the cheerleader continue talking and as she invites her to join the team. She just has to meet the team on the soccer field at 10 pm. Zoe says she’ll think about it.

Hunter over hears her conversation and tries to apologizes so that she won’t join the team. Zoe answers back by insulting him in any way possible before blowing him off completely. Back to the flashback, Zoe gets tired of waiting for her friend after school and heads to the teachers classroom. When she gets there she sees the teacher forcing himself on her friend. She busts in the room and hits him in the back of the head with a book causing him to fall and smack his chin on the desk killing him instantly. The girl confesses to Zoe saying that they were in love and that it was a sex game. The worst part is, it was the girl’s idea to role-play as a molested student. This leaves Zoe and her friend with only one choice when it comes to the teacher’s body... get rid of it.

On the soccer field (maybe it was football field, does it matter?) Zoe shows up to meet the other girls. They give her a very high tech lie detector and tell her that she has to answer three questions and that if she lies she’s not getting on the team. Zoe’s past is catching up to her and she’ll have to decide how bad she wants on the team and to move up in the pecking order of the school.

This issue is pretty good as it establishes Zoe as a character more, but it raises some inconsistences with her character. At this point their probably intentional so that they can be explained later, but a definite clue was needed so that it doesn’t come off as an error. Zoe also earns a lot of cool points with her attitude and "calls it how it is" dialog. She doesn’t really care to be a cheerleader she just wants to move up in the social order at the school.

Nick Spencer does a good job with this issue and proves that he’s a consistent writer and a good one as well. He does a great job with the snappy dialog coming from Zoe and I wonder if she’ll be the focus for the next story line after Megan was developed so much in the first arc. One thing about the story is that with the first arc over the series doesn’t feel as special as it did. A bit of the luster is gone and it wasn’t restored with this issue. Hopefully Spencer finds whatever it is that made this book a hit so that sales don’t begin to tumble.

The art is of course beautiful. The cover is one of the best and my personal favorite thus far. The interiors remain amazing as well. Joe Esima draws beautiful people wonderfully and I don’t mean just the women. The men all look like fashion models as well. Esima has a smooth pencils style that complimented by the coloring. The color in general is gorgeous and huge parts of making the art of the book look good. Colored any other way and it would look just terrible.

This issue is good, but I was looking for it to wow me more like the first six did. Perhaps Zoe’s don’t-give-a-crap attitude wears off on the readers a bit making them hard to impress with the shocks and awes of the story. Or maybe it’s becoming more formulaic than it realizes and because of such it’s easy to predict the story. Regardless, I still enjoyed the book and it’s just too damn pretty looking not give the next issue a shot as well.