Whereas the last issue focused on Zoe, this issue is all about Hunter. It shows him as a little boy running frantically towards a street. Just as he’s about to run out in front of a truck an unseen man grabs him and pulls him back. The unknown man asks Hunter why he’s in such a rush. Hunter tells him that he was supposed to me his father but lost track of time. The man tells him that being late won’t make his father nearly as upset as him not looking both ways before crossing the road. The unknown man gives Hunter his gold watch and makes him promise that he’ll never be late again.

Present day Casey and Hunter are sitting in the library studying next to each other. Casey is studying her notes from class whereas Hunter is studying Casey’s form. She asks for his notes from class on some subject that is there surely to impress readers of the writer’s knowledge. Hunter spazzes out for a moment then asks Casey out on a date… very loudly. She turns him down, but out of curiosity asks what they would do since they’re trapped at the school. Hunter says that he would have taken her on a picnic in the courtyard. They have blankets, food and a grassy knoll so he figured it would be prefect. Casey takes a moment and then agrees to go on the date with him later that day. Of course she tells him not to be late. 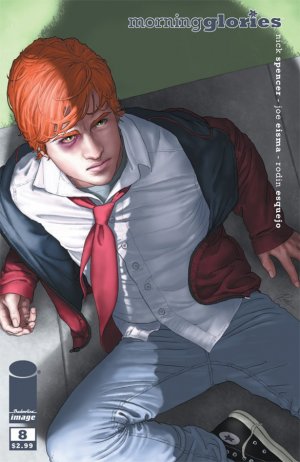 Hunter heads back to his room dancing and singing with his iPod, clearly he’s on cloud nine from snagging his dream girl. Unfortunately he bumps into an older student and scatters his books all over the floor. Surprisingly the guy is very calm about it and tells Hunter not to worry. Instantly is seems off since no one in the school is actually nice to one another unless their working an angle. Hunter continues to his room where he tells Jun the good news. He asks Jun a favor though… He has to tell Hunter when it’s time for his date. Jun offers to set him an alarm so he won’t miss it, but Hunter assures him that he will have to tell him. It seems that whenever Hunter looks at a clock when something important is happening his brain tells him the time is 8:13. Meaning at multiple times during the day the time will be 8:13 when in reality it is not.

This issue had its good moments and annoying moments. I wouldn’t say it’s bad and in fact it’s a stronger issue than seven was in a lot of areas, but then weaker in others. It’s probably because Hunter’s condition is more interesting that Zoe’s ability to remorselessly kill others. Also Hunter remains the most likeable character in the series, mainly due to the fact that he’s such a dork. I didn’t care for the fact that the formula for the issue was almost exactly the same at the last. I’m okay with a theme that unites the next story arc, but it didn’t make the issue very surprising when shocking moments happen on the same page number as the last issue. Starting off with the character as a child and having the unknown man looking in on them is interesting, but then it becomes over-kill later on. It really seemed like a carbon copy of the last issue. Also the very cliche failure of Hunter and Casey's reaction didn't seem genuine. It felt like Nick Spencer was trying to draw an emotion or experience from the reader, without ever having one himself.

The art is still great and the saving grace of this book. The cover is thankfully different as it has Hunter getting beat up on the cover. The scene is still iconic and really stands out from other comic art today. Frankly put, the cover art is the best work of the series. The alternate cover is still iconic, but less interesting since two of the three characters have no involvement in the story. The interiors are still wonderful and strong, but obviously it’s not the cover art. The coloring for both cover and interiors is the uniting grace and consistently strong throughout the issue and series.

Frankly at this point if you’re reading Morning Glories you’re probably going to keep reading it until it really slaps you in the face. The story is still mysterious enough to hold people’s interest and the reveals are pretty good as well. Hopefully Spencer and company deliver in the next issue and recapture some of the magic they had in the first story arc, otherwise this series could end up a total flop filled with Pop-culture references.

UPDATE: It is Casey not Megan... maybe these characters are a little too forgetable?