Guess who’s the star of this issue? Go ahead, guess? If you said Jun you're wrong, but it's okay you haven’t read the issue yet. Issue 9 continues the trend of being about one of the main characters from the story. The first issue in the arc was about Zoe, then Hunter and now the infamous Jun… and his twin brother Hisao!

The book starts with reshowing us the events from issue two or three when Jun tries to escape the compound only to be stopped by Hisao at gunpoint. Old news, right? Well the book goes on to show us the teens when they were just young boys. The school that they now both go to comes to pick them up and take them away from their mother freely. The two representatives for the school are none other than Miss Daramount and Mr. Gibbs. Things are going smoothly until Jun’s mother mentions that he was actually born on May 5 and not the 4th as his birth certificate states. Gibbs and Daramount exchange glances and then inform her that they can no longer take Jun, but tell her a lie as to why. 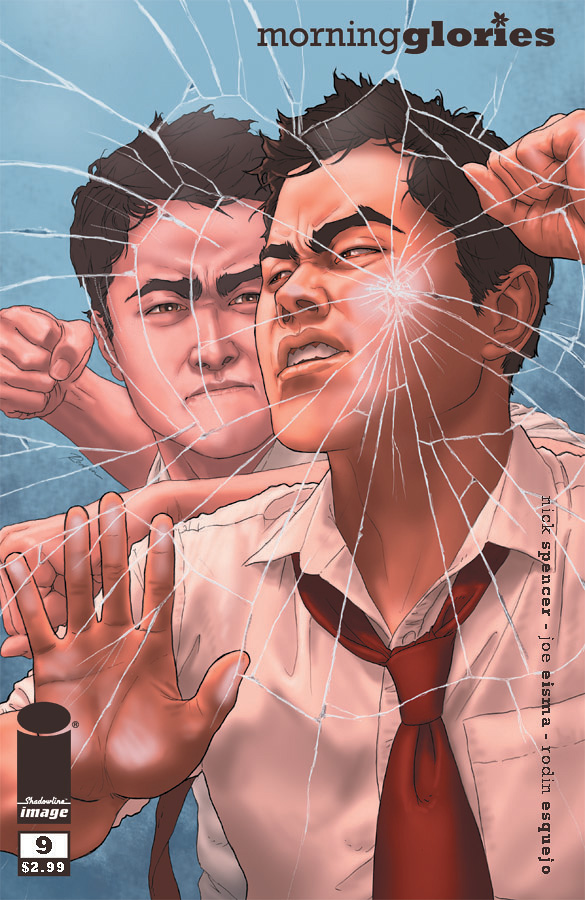 This issue does the most to move the mystery forward and actually makes Jun into a character instead of the emotionless single-minded being he’s been portrayed as from the start of the series. Although after you see his life you’ll be able to understand why he is that way. We also see our mystery man Abraham return once again in this issue. I’m assuming we’ll get to see him one more time at least, but he’s only interesting for so long so hopefully they explain him sooner rather than later.

The story was definitely more interesting in this issue and Nick Spencer tries to add some real emotion to the book. Unfortunately that turns out to be a hallow attempt since the book has been devoid of real emotion for so long that it just doesn’t work with the story any more. In fact it’s a bit ridiculous for Spencer to ask the audience to feel anything for the characters after showing so much senseless death in every issue.

This is the only issue that I really didn’t care for the artwork. Not only does it have recycled pages from a previous issue, but it seems very rushed and comes across more like filler than anything else. Joe Esima might be part of the reason the emotions in the story doesn’t work out since the scene is very awkward and a full page on top of that. If it had been just a scene snuck in quickly before moving on it might have worked better and been believable. I can’t take too much away from the art other than the flat backgrounds and the house that doesn’t look like anyone really lived in it. The issue is dedicated to Dr. Jose Esima who we can assume is Joe’s father and it was very nice of them to dedicate a page to him in the comic. Not something you see a lot of in comics without a huge editorial to follow it.

I enjoy Morning Glories, but there is just something about this book that rubs me the wrong way and I think it boils down to Nick Spencer. I just don’t know if his stories are genuine or if he’s figured out a formula with Morning Glories that people like. I guess I just don’t see the heart in the story that you normally do with a creator-owned project and that makes this series come off more like a shallow corporation produced it rather than three guys and an Image imprint. Regardless of that fact the book is good enough to stick with for at least a bit longer so that more of the mystery can be revealed.