By: Justin Moody | Comic Reviews | June 7, 2010
Mouse Guard Legends is the newest miniseries to entail the Mouse Guard franchise. The new four part series is not a continuation of the previous two volumes. Legends is a series of short stories that has several writers involved in the epic series. The writers include: Jeremy Bastian, Ted Naihef, Alex Sheikman, Scott Keating, and yes the great David Petersen creator of the franchise.

The stories take place in a tavern in Barkstone, Fall 1154, two years after the events of Winter 1152. In the bar, we are introduced to Carver, an old mouse that comes regularly to the tavern to drink. Carver has accumulated a hefty bar tab due to his drinking habit over the last two seasons and the owner, June, has called in the tab. Carver is not the only one that owes money in the bar; other regulars quickly become unhappy by June's decision. So June decides to make things interesting, but what does she do? She creates a contest within the bar and the best story gets their tab cleared. There are some ground rules however: No complete truths, no falsehoods, and it must be a tale that she's never heard. 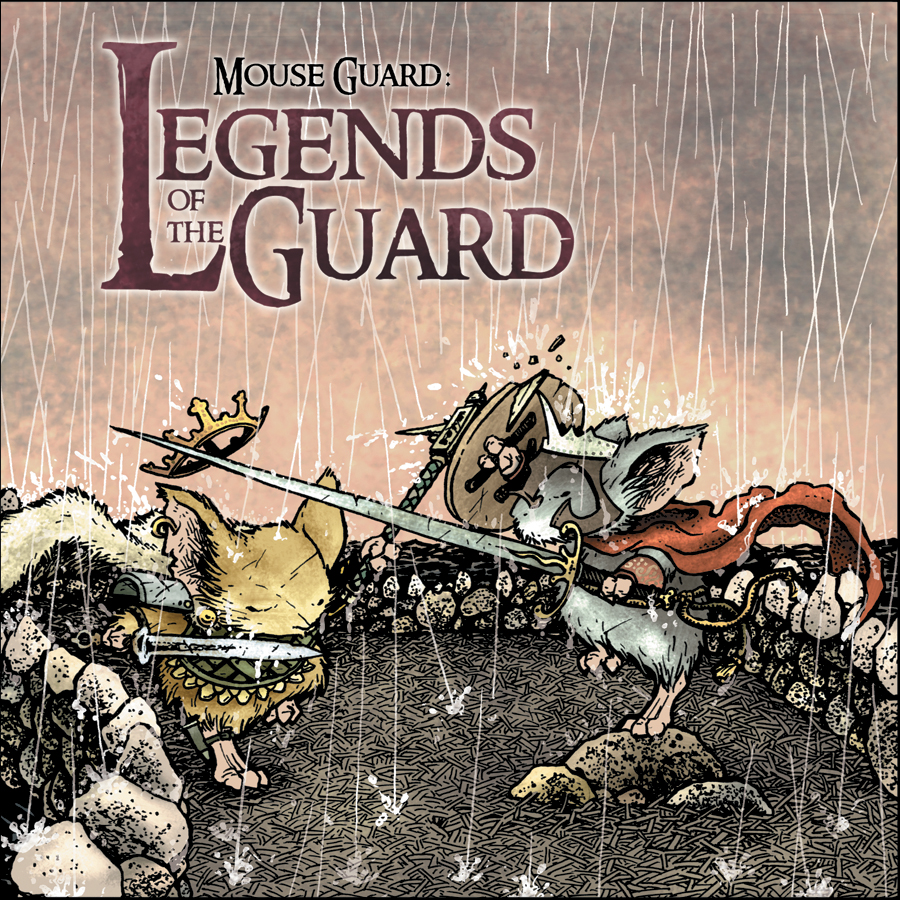 The first story is titled, The Battle of the Hawk Mouse and Fox Mouse. This first story gives you a brief history of how the guard was created. It's a tale of two different mouse clans that were under the rule of dangerous animals. The guard was created after events between their two champions, and the defiance of one mouse to his former master.

The second story of the book is called, A Bargain in the Dark. In this tale we are introduced to Tristam. Tristam is a fearless treasure hunter/adventurer but has become lost due to a flash flood. Tristam tries to get out of the cave he's in, but quickly runs into trouble. He is encountered by a bat. However, the bat is wounded and unable to move. He asks Tristam to help him out of his predicament and in exchange the bat will guarantee an exit for the fearless adventurer.

The third Story in the book is titled, Oleg the Wise. It's a tale about an old warrior king named Oleg. Oleg had a steed that he loved and trusted. Wherever Oleg went his steed would always go. One day after a battle Oleg and his steed are surprised by an oracle mouse. The oracle gives Oleg a message. He mentions that his steed would one day be the death of him and that he should get rid of him. Oleg has a tough decision to make: Does he keep his steed and ignore the oracle, or does he release it never to see it again.

Mouse Guard Legends is an awesome book, not only is this issue the first part of a four part series, but it's a first part of a series of mini stories; making this new mouse guard a very fun read. This issue gives you a little bit of history on the Mouse Guard world. It gives you adventure in the second story and a mixture of heart and adventure in the last. The art in this book is truly amazing, and each writer of their story does their own art and it is accompanied by Scott Keating doing the colors. Each writer gives his own style to the book especially in the art, but each writer does a good job of keeping with Peterson's original tone and feel. David Petersen is sprinkled throughout the book to remind you that you're still reading Mouse Guard. Overall this book was a blast. Great art, great story and best of all awesome creators!!!