Whether you specifically asked for it or not, Tron: Legacy is the blockbuster centerpiece of the holiday season. Disney has sunk hundreds of millions in making this follow-up to the cult-classic 1982 film the hit it believes it can be. Naturally, there's some doubt as to whether the Mouse House can pull this off. We (Steven and Max) weigh in on the film looking to ignite the dork in all of us.


Thoughts on the Original Tron

Steven: The original Tron epitomizes the geek guilty pleasure film, more so than even the "Star Wars" franchise. An imaginary computer world? Really? Despite the fact that the set of the 1982 film looks like a neon tape-wrapped laser tag arena, Tron was something special and way ahead of its time. Steven Lisberger and Bonnie MacBird drew on everything from the ancient Romans (the grid games) to Alice in Wonderland, imagining a computer network as something endless and wondrous as opposed to the mundane view we have of our daily-used technology these days.

To put it in perspective, Tron pre-dates James Cameron's directing career and Cameron is in many ways the father of epic sci-fi movies ahead of their time. Tron is not nearly the spectacle Terminator is considering just a two-year difference, but to call the film anything but progressive is a discredit.

The story is not very special, but the joy of watching Tron is waiting for the next innovative set piece, vehicle, special effect or grid game around the corner. I anticipate that Tron Legacy" will be much the same way.

Max: Have to agree that Tron is a guiltier pleasure than "Star Wars" (especially if Tron Guy is any indication). If little people buzzing around on light cycles is what keeps our technology running, than I may never look at the "Terminator" franchise quite the same. Regardless, I couldn't agree more with you about Tron being ahead of the game in terms of effects in filmmaking. Its very setting was a tremendous example of where films could take a viewer in terms of imagination: not quite reality and in a sense, not quite fantasy. Effects can always get better but lackluster script and characters are forever, which is why Tron might not have aged so well. Still, I think it's a safe bet that Tron Legacy will live up to it's...uh...legacy in terms of advancing the field of special effects in film: this case being 3D special effects.

What's Most Exciting/Most Concerning about the new Tron: Legacy?

Steven: The Shining composer Wendy Carlos' synthesized score might be the most under-appreciated thing about the original Tron, so I was stoked to hear Disney was honoring that by bringing in gifted electronic musicians Daft Punk to score Tron: Legacy. I have intentionally avoided listening to the soundtrack since and eagerly await the final results. Although the visual impact and production design of the new film excites me most, I am more eager than usual to hear the music.

The only thing I'm worried about (and I shouldn't be because Disney has made this its tentpole of 2010 for a reason) is that "Legacy" will be a bit more for sci-fi fans and not hit as well with a new audience of people not around in 1982 who never discovered the original. The story will build on plot elements of the original, but I hope the set-up doesn't feel "exclusive" in the sense that you won't know what's going on unless you remember the "Tron" universe. Like Avatar did, I really hope the story has a universal feel to it that appeals to more than just the geek audience that is already eager to embrace it if it's any good (that includes myself). 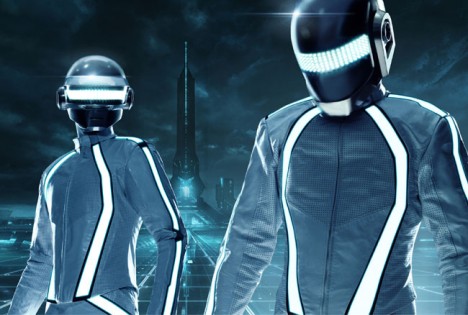 Max: I won't lie to you when I say I jumped a little when I heard Daft Punk was doing the score. So much so that, against all of my will power and better intentions, I have sought out the small pieces of the score that have made their way online in the past month. I won't give anything away but I think it'll be safe to say Steven that if you're a fan of the original, you'll get a kick out of Daft Punk's take on the "Tron" world. Definitely don't think I'm alone in saying that while the visuals are playing a big part of getting my ass in a seat, Daft Punk is an even bigger draw (please tour the States ... please ...).

I think it's a safe concern that "Legacy" may come off as a bit exclusive to fans over new audiences. Still, like you say, it has been a tentpole for Disney all year, and if they're aim is anything, it's to bring "Tron" out of it's cult status onto an internation franchise stage. There looks to be plenty to go around for the common viewer, with little easter eggs thrown in for the already converted (like us!).

I'll say right now I'm not worried about the script/characters/performances. It's a movie built on it's visuals, so unless the actors drool everytime their mouths open, I'll be fine. If I'm concerned about anything, it's the idea of Jeff Bridges playing both hero and villain, a la the digital technique used in recent years to make actors younger/older. The only time I thought it worked well (in an overly long movie, just to show off it's production values it seemed) was in The Curious Case of Benjamin Button. Everything I've seen of Bridge's villain Clu, making Bridges look around 35, doesn't look horrible, but still not quite believable. It kind of looks like a wax sculpture come to life in a raver world or worse, a badly dubbed foreign film...in English...set in a computer...to a French electronic group's score (you get the idea).

Max: Of all the 2010 releases, I can’t think of one that’s a better excuse to see in 3D other than “Legacy,” especially since the debate around 3D being the next step in filmmaking is mounting in the public and professional realms. When Tron was released way back when, CGI was barely a concept well executed on screen; the same can be said for the 3-D format in today’s cinemas. “Legacy” almost demands a 3-D showing out of a viewer, specifically IMAX 3D. Taking a similar approach to The Dark Knight IMAX run, “Legacy” will feature specific action sequences shot in the IMAX aspect ratio (not shot on IMAX cameras though), making one hell of a scaled image. Combine that with a 3D presentation, and you could have light cycles the size of small buildings headed for you. If that’s your game (pun intended), a 3-D (IMAX) show is likely the way to go.

Steven: I’ve seen two films in 3D and only one was worth it – Avatar. But if any film has me seriously considering donning the glasses again, I’m with you Max, it’s Tron: Legacy. Disney has spent years making this film the visual spectacle it appears to be and an IMAX 3D viewing would do the scale of the project justice in the same way 3D was a must for Avatar. The goal with “Legacy” was for it to be about magnitude and impact from the get-go, whereas so many 3D releases have been about higher ticket prices and appealing to this short-lasting spike in demand caused by Avatar (hence all the post-conversion nonsense). Although I’m usually the first to say “2D’s fine by me” (I never say that, actually), I feel good about recommending the IMAX 3D “Legacy Experience.” If nothing else it will bring me closer, literally, to Olivia Wilde.

Hit or Miss? How will Tron: Legacy perform at the box office?

Max: Just from trailers and spots alone, you know what you’re getting into with “Legacy.” It’s a bright and slick sequel to a classic film that was not remembered for its story/characters but its effects. With the Disney brand at its front, a PG rating to quell fears of parents, a 3-D presentation (with higher ticket prices) said to actually be “an experience” and an original score put out by electronic icons Daft Punk, you’ve got a little something for everyone to justify buying a ticket. Not to mention Disney marketed the hell out of this movie, especially in the final months leading up to it’s release (see “Tron” Tuesdays). Early reviews are not (yet) ripping the film apart and with enough positive word of mouth, I could see it clearing $200 million during it’s domestic run.

Steven: Although I hate using this term, "cautiously optimistic" is how I feel for the success of this movie. Disney's done everything it possibly can to this film to make it appeal to everyone (as you mentioned) with the PG rating and crazy marketing -- aside from remaking the film as another "Pirates" movie. But the bottom line is that Tron does not have the built-in fan base that most mid-December blockbusters offer and I think that caps its success. It's a tough sell. Since reviews are erring to the side of positive, perhaps, like with Avatar but not to a huge extent, "Legacy" opens to okay numbers, maybe $40 million tops, but then stays solid throughout its run, maybe even going up like Avatar did from week one to week two. I'm not a total believer in $200 million, but that's an achievable goal.