When people think of the Grimm Fairy Tales line of comics the first thing they think of is the covers. The very adult themed covers that depict woman in sexy outfits dressed in the costumes from your fairy tale youth. Grimm Myths and Legends is an off shoot of the Grimm Fairy Tales proper ongoing series and takes a different approach to the horror fairy tale genre. The cover would lead you to thinking that the story is about Red Riding Hood and the Big Bad Wolf, but not really. In this setting Red Riding Hood works in a top-of-the-line mental health hospital and the Big Bad Wolf has infiltrated the faculty for reasons unknown.

The issue begins with one of the patients being subdued after witnessing the Wolf’s (shape changing werewolf) first attack. He’s a man that hasn’t spoken since arriving at the hospital so it’s shocking to the staff to hear him speak. Enter our Red Riding Hood who is one of the doctors on staff. After being filled in on the events of the previous evening she’s off to a group therapy session. Meanwhile the maintenance crew heads downstairs to get supplies. One of them plays a joke on the other by locking him in a room with no light. Too bad the Wolf is inside of the room and tears the man apart. When the second man opens the door to see what the commotion is about a giant claw reaches out and pulls him in. 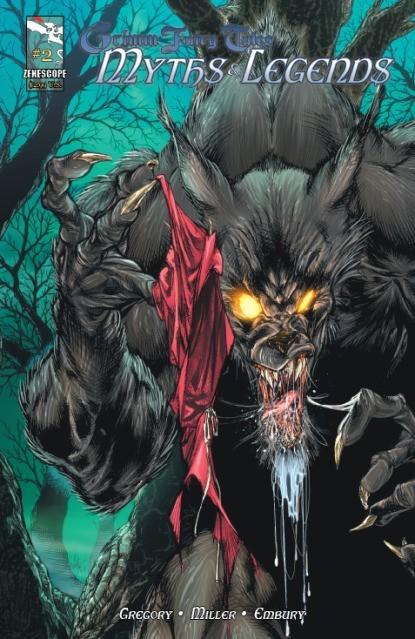 Back in group therapy one of the patients, Annie, has smashed her head on the glass of the building windows. She’s a cutter which is apparent by the large amount of wounds all up and down her body. She’s taken a piece of the broken glass as a weapon and demands to go outside. She cuts one of the personnel, Kasey, with the glass. Our Red shows up and begins talking Annie down from the situation. Kasey takes his opportunity and tackles Annie making her have even greater trust issues. She continues to freak out about going outside until a storm front moving in catches everyone’s attention. Meanwhile the Wolf is on the move as he takes the form of the janitor he’s just killed.

First of all, stay the hell out of the basement. Three people are killed there so it’s a safe bet that if you go down there you’re dead! To continue the story is okay. It’s not going to blow your mind, but it’s decent for a horror comic book with a fairy tale twist. The writing and art are pretty much on par with each other, neither one out shines the other. I do have to give credit to writer Raven Gregory for the way he handled the scene between Annie and Red. It was believable dialog and had a realistic tone and solution. I will say that the angle of the Hospital having to maintain its capacity is a bit played out and I wasn’t a fan of the freak storm front moving in, but to be honest its nothing that Hollywood doesn’t pull all the time in movies.

The art is good, but very inconsistent at times. The first pages are forgettable due to the spastic facial expressions of the characters. Of course the art improves when a beautiful woman shows up, but that’s to be expected. Artist David Miller’s strongest work is actually the Wolf. Big Bad looks like a total bad ass and the gore/carnage is very detailed and realistic. It’s a shame that he’s forced to draw extra throw away characters just to give the setting a feeling of being alive.

Overall I can’t say that the book was for me, but I know someone out there probably loves it. Let me clarify by saying that it’s not the concept of the book that I don’t like. I like horror comics and even the sexy fairy tale twist added to it. It’s just the execution of it all. The formula is simplistic enough that it could be the setting for any October movie release, but it’s completely un-needed. The setting of the mental hospital and the characters is really all that was needed for this story to grab me, but when you add the extra elements just to give people familiarity it’s just not as strong as it could be. Loose the storm and the unrealistic need for full capacity and there's still plenty of ways this story could have worked.