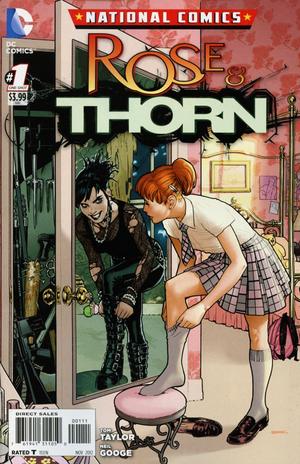 I have never read anything with Rose and Thorn, but when I was looking at the comics that were coming out this week I saw this comic. It looked pretty interesting for a one shot so I wanted to give this comic a try. This was a definitely a comic book that I got at whim.

The cover for this issue is what persuaded me to get this book. The art was really good, and it makes you question how these two different personalities can be the same person.

In this issue we learn that Rose has another personality. Rose blackouts and her alter-ego Thorn takes over. Thorn takes over Rose's body to figure out who killed their father.

This felt more like a first issue to an ongoing series than it did a one-shot. Most one shots start stories for new comics or just a quick story with a happily ever after ending. With this issue we have a cliffhanger that makes it seem that this series is going to continue. I have not heard of any word that this series was going to continue. So, it was weird how they tried to start a new story arc for a series that has only one issue.

I did enjoy Rose & Thorn though. It felt like a very different series than what DC usually puts out. I liked that there was an element of mystery after only reading the first page. You want to know exactly what is going on with Rose, and if she is actually going crazy.

They do mention Rose was in an asylum before the events of this issue. So, this makes me think that there is a bigger background to this series. It is kind of weird how they bring up that she used to be in asylum though. They say it like it is normal.  Even the popular girl doesn’t really use it against her as much as a normal mean girl could.

Even though I enjoyed this issue. I am still hesitant to say pick this issue up. I think the story is worth it, but I don’t know if it is worth investing in when you know that the story does not continue from here. Especially since it feels like it does continue from the place they leave off in this issue. I say pick it up for the story. It is interesting enough for $3.99, but you have been warned that you are going to want more.