2K announced today NBA 2K12's new game mode, NBA's Greatest, which allows players to play as some of the best basketball players the world has ever seen. Similiar to NBA 2k11 Jordan's mode, instead of focusing on one player, NBA Greatest alows fans to play 15 historic games that showcase some of the sport's best.

So far only players have been announced so far, Michael Jordan, Larry Bird, Magic Johnson, Kareem Abdul-Jabbar, and Julius "Dr. J" Erving, plus ten other Basketball legends to be announced in the coming weeks. NBA Greatests features historic games that have the entire team rosters, accurate stadiums, and are presented to look like their respective era. "It's one of the things we're most proud of as a franchise," said Jason Argent, vice president of marketing for 2K Sports. "This was a labor of love for everyone." 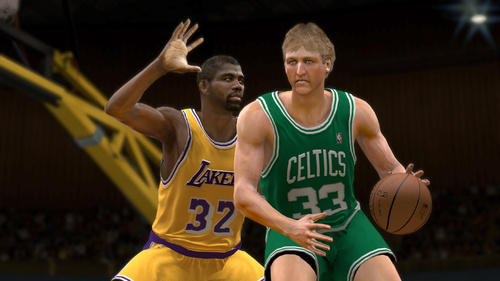 Argent said the unannounced legends could be from any time period, which gives hope to those who want to see legends who played before the 1980s. Oscar Robertson, Jerry West, Bill Russell and Wilt Chamberlain could still be showcased in the mode. Argent also said if the legendary game was originally played before the shot clock or 3-point arc, it will be reflected in the mode.

Another great feature in NBA Greatest is the ability to unlock classic teams and play them against today's lineups. Kareem Abdul Jabbar vs Kevin Garnet, Charles Barkely vs Lebron James and Kobe vs Jordan. "There's the age old debate how players and teams from today would compare with teams of yesterday, We want to settle that debate" said Jason Argent, vice president of marketing for 2K Sports.