People who say Facebook isn’t the future of gaming have not tried out the new Need for Speed: Hot Pursuit demo. Developed by Criterion, the studio behind the Burnout series, Hot Pursuit’s most touted feature is “AutoLog,” a type of in-game social network that keeps constant tabs on the progress of other racers on your friends list.

This goes beyond just a regular leaderboard, though, and makes an earnest attempt at making a community out of a racing game. After going back to the main menu after my first race, message posts advertising my friends’ best race times continually floated past my screen, egging me on to try just one time.

The demo offered two race tracks from the game’s career mode, all of which takes place in the game’s fictional Seacrest County. As a sign of how seriously Criterion is pushing the AutoLog feature, one of the race tracks was only unlocked after the game detected somebody on my friends list also had the demo, thus giving me somebody to compete against.

Though neither race showed off the open-world feature of the game, each had its own Facebook-style wall where friends can leave notes, taunts, photos or suggestions for fellow racers. The posts also keep track of your friends’ best times and what cars they used for each race; highlighting a post and pressing the right trigger button automatically sends you to the course they competed on to give you a chance to break their record. 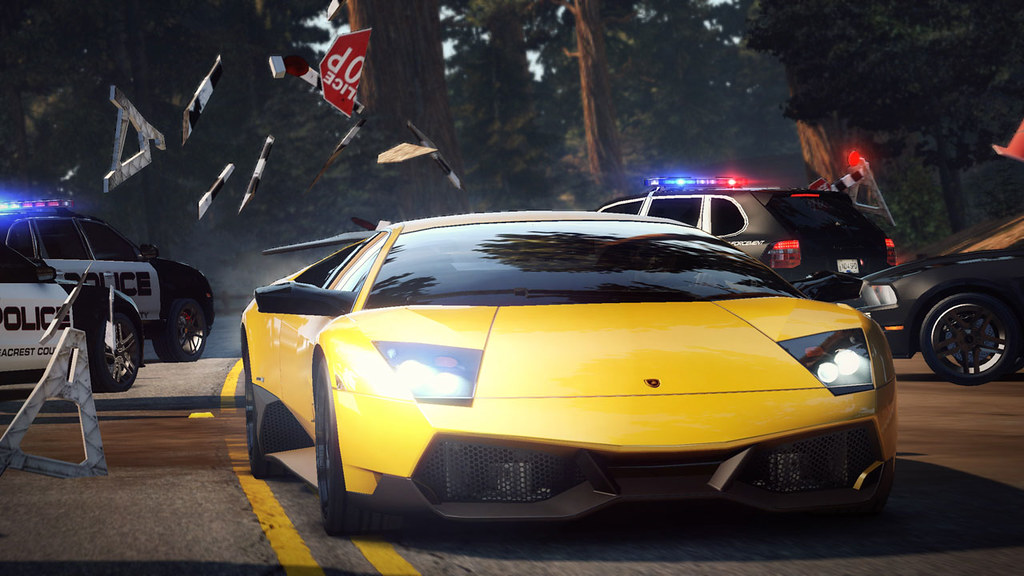 The cars, which are all real-world sports cars like the Porsche Boxster-Spyder and BMW 370Z, look great and though a lot of detail went into designing them Need for Speed is not a Gran Turismo style sim. Nitro boosts are awarded by slipstreaming behind other racers and in my first race, which took place on a highway curving around a mountain trail, shortcuts took me through lumber yards and roadside rest areas. Being something of a sloppy driver, I can safely say that Criterion’s crash animations still look spectacular. Fulfilling certain criteria during a race, such as hitting top speed or finding a shortcut, contributes towards the game’s experience system, called “bounty.”

The other course available was taken from the game’s “Dark Horse” mode, where players assume the role of a cop busting street racers. This mode appealed to the Mario Kart-er inside of me as my cop car had access to two “weapons” – a set of spike strips I could dump behind me and the ability to call for a police road block. The goal is to crash as many racers as you can by ramming them with your police car and using your police tools. Dark Horse was fun but almost comically violent at times – I guess the cops in Seacrest County aren’t known for giving out speeding tickets. I also wish the demo would have let me try out the cop’s other toys, an EMP blast and the ability to call for helicopter assistance.

Though I was disappointed by the inability to freely explore Seacrest County in the demo, Criterion’s plans for AutoLog as well as the Dark Horse mode definitely have me interested in the game. It may not be as over the top as Burnout, but with its built-in social network and gorgeous visuals, Hot Pursuit is something competitive racing fans should pay attention to when it releases Nov. 16.