Neeson vs. Neeson – Round 1

Back in January we ranked the most badass Liam Neeson roles to coincide with the release of The Grey, which churned out another badass Neeson character worthy of that list. Now that Taken 2 is about to come out, what else if left but to imagine Liam Neeson’s various characters battling to the death until one badass emerges victorious? Nothing.

We’ve carefully selected eight contenders for this tournament, which features a god, a Jedi, a retired C.I.A operative and a vigilante superhero among others. We’ve spelled out how we think Round 1 would go, but after that it’s up to you to decide. 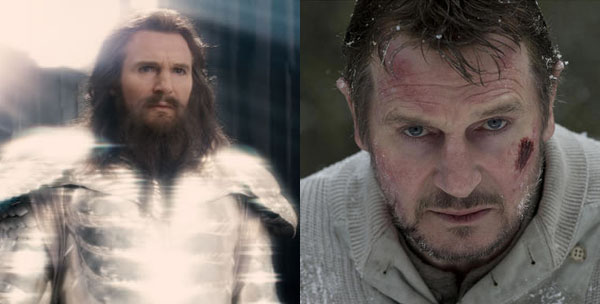 Zeus (Clash/Wrath of the Titans) vs. John Ottway (The Grey)

We’re big fans at Player Affinity of Neeson’s newest badass, wilderness expert/wolf-hunter John Ottway, but as much as Neeson’s performance in that film towers over his two turns as Zeus, it’s hard to imagine Ottway winning in a fight vs. the king of the gods. Wrath of the Titans proved that gods are destructible (otherwise this tournament would already be over), but Ottway has a bit of a death wish. At the end of The Grey he raises his voice to the heavens only to get no answer — he doesn’t have a prayer against Zeus either.

In this matchup, it’s not a matter of physical skill and ability. A lightsaber is a deadly weapon, but Darkman has super strength and an incredible pain tolerance. It’s when we take a look inside each character that a clear winner emerges. Qui-Gon commands the force, which means his mind is clear and focused. Darkman, on the other hand, as part of the side effects of his burn treatment, is extremely emotionally volatile and can snap out of anger at any minute. We all know anger leads to fear and fear leads to the dark side (hence Darkman?), and anyone with anger in their heart can’t possibly outsmart a Jedi.

Here we have a battle between masterminds. Ra’s is the man behind a plan that saw Wayne Manor burn to the ground and Gotham City nearly destroy itself in fear. Hannibal Smith is the brains behind some of the most extravagant black ops missions ever pulled off. Both men are gifted with impressive (though different) physical skill sets. Hannibal’s laid back attitude gives him an edge, but it’s voided when you consider the potency of Ra’s blue flower. Ultimately, you gotta give this one to the guy who commands one of the world’s most powerful and dangerous organizations. His resources are far too vast.

Being separated by more than 200 years, it’s tough to say who might win between an ex-CIA operative who’s deadly with a gun and a Scottish clan leader who’s deadly with a blade. If Rob Roy existed in the 21st Century, wouldn’t he give Bryan Mills a run for his money? Flip that, however, and we’re pretty sure Bryan Mills would still have a pretty good particular set of skills in the 18th Century.

Now it’s your turn to decide. Pick the winner of each of these two matchups and explain your reasoning in the comments below! The final bout will be determined on Saturday and you’ll have the chance to choose the tournament winner.