Netherworld #1, was an excellent first issue that tricked me into thinking this was a noir bounty hunter, crime fiction set in real fictional world. Everything was great until the end of the issue, when a monster appeared and what I thought was a normal crime fiction, transformed into Blade meets Buffy set in a  "monster" comic book. Mind you, this comic could have been a great crime fiction. Up there in the ranks of creators like Ed Brubaker and Brian Michael Bendis and similar to how they got their start in comics. But now-a-days everything is about monsters. Feeling that this trend is already overplay my expectations for issue two were a bit low.

In our last issue, bounty hunter Ray Parker was hired by two different parties to find a missing girl named Madeline. When he found her she was being harrassed by a group of thugs, then one of them transforms into said monster. This issue Parker fights his way against this big powerful monster. Parker of course wins because he is a badass. The girl is reluctant to go with him, but he drags her anyway and takes her to a secret underground shelter. This place is run by Alexis, she is part of one of the parties that hired Parker. 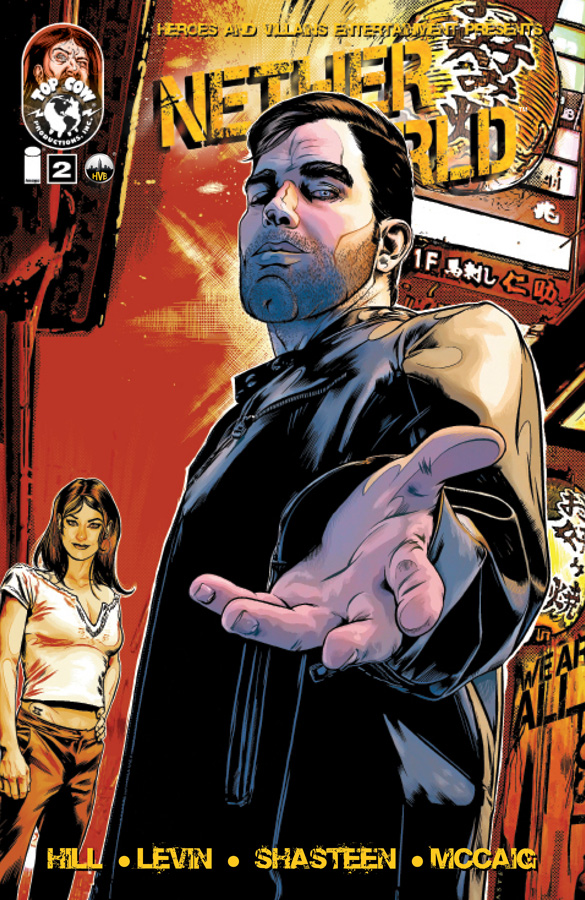 She tells Parker why the girl is important. Turns out we are all dead and the place that they are right now is purgatory, Madeline is apparently the chosen one. The one that is the key to a gateway to heaven. Kane the leader of the opposing party is against that and gathers an army to find her and kill anybody who is helping her. The thing about Kane's followers is that they could be anywhere. One of them is spying on Alexis' group as they talk, he screams, "I'm a follwer of Kane" and he reveals he has explosives taped to his belly.

The issue is filled with rapid cinematic action and is one of those books that you can easily read in three minutes. The story is interesting enough although unlike the last issue were it was more character driven, this issue is more exposition driven. That is okay, this is only the second issue; when the first story arc is finished we will see if the creative team accomplished their goal, but for now this issue is what we got.

Issue two as part as the writing duties goes, it manages to get the job done. It entertains, tells what this series is all about with good characterization and fast adrenaline action. Although the writing gets the job done, it doesn't impress. It favors to ignore what could be great dramatic scenes by just concentrating on the action. For example: Ray easily accepts that he is in limbo. Sure like the Superman movie he gets a magic kiss to make him believe in this Matrix like story. But this also goes for the readers too. Except for the monsters (that we don't even know what they are) the writer doesn't give any solid evidence that this is in fact purgatory.

The art is cinematic and carries the story well, very fluid and really knows how to draw action scenes. The art will trick you into thinking your watching a movie rather than reading a comic book.

Now that we know what the real story is all about, I can't help but prefer the crime fiction angle they showed in the first issue. This issue is not bad, if this is the true direction the series is going it needs to show a little more attitude. Tell us why this series is different and worth spending our money every month. Issue two doesn't have the same charisma  that the first had, but it has a better cliffhanger. The series has the possibility to get better and demonstrate that is a contender on your reserve list. If you have some extra bucks give this series a try.

Overall Score - 6.8/10
*Satisfactory:  A title that's not for everyone, has a few stand out moments but nothing out of the ordinary*