A new gameplay trailer has emerged for the PS3 and Xbox 360 summer title, Deadpool.


Directed by the Marvel anti-hero himself, this latest trailer from creators High Moon Studios shows our red suited protagonist in all his shooting, slashing and comical glory.


The above clip, which features an impressive air guitar solo by Deadpool, also shows the games use of the fourth wall narration technique, which the ‘Merc with a Mouth’ is universally renowned for.


Also featured in the trailer is the presence of Cable, who is said to make a guest appearance in the game along with other Marvel characters such as Domino and Wolverine, who is supposedly being voiced by John DiMaggio. Nolan North, the voice of Nathan Drake, provides the voice of Deadpool. 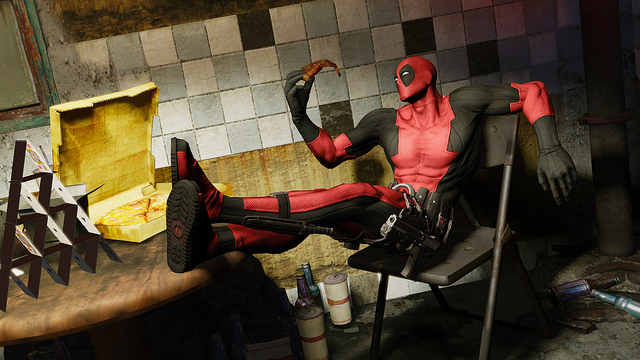 Daniel Way, a former Deadpool writer who also penned X-Men Origins: Wolverine, is said to be writing the games storyline. According to Sean Miller, the games director, the game begins, “…as any good Deadpool adventure does – with a mercenary mission – but quickly becomes something much bigger as Deadpool finds himself on the island of Genosha, the site of the great mutant massacre in the comics, fighting for the fate of the world.”


In his post on the PlayStation blog, Miller also discussed the games combat system saying that, “Combat in Deadpool is what you might expect from a manic mutant mercenary with voices in his head – fast, frenetic, adaptive, and always entertaining. Much like Deadpool himself, however, it’s far deeper than you might expect.” He also added that, “It has all the elements of an action brawler mixed with a solid shooting experience.”


Judging by this latest trailer, Deadpool is going to be one hell of an entertaining game to play, but what do you think? Are you looking forward to Deadpool’s video game debut? Let us know what you think below.