Microsoft launched its E3 2012 press conference by revealing never-before-seen footage from their most anticipated release this year: Halo 4. Beginning with a live-action trailer set onboard the UNSC Infinity, we watch as the ship comes crashing down to the ground, after being disabled by what looks like the Forerunner equivalent of an EMP. As Master Chief looks up to the see the ship descending somewhere into the distance, a mysterious, spherical spacecraft (presumably Forerunner) chases after it.

After this quick taste of chaos, in comes the new gameplay footage, and it’s revealed the most out of anything 343 have shown us so far. The HUD has had a quick makeover. Master Chief is longer restricted to carrying two of each grenades; grenade capacity has been reverted to as it was in the first Halo. The new HUD also features a pop-up visual in the top left, showing a hologram of Cortana when she speaks.The gameplay trailer takes place in a jungle-like environment, similar to the setting of the first level in Halo 3. The battle rifle is a welcome return, and makes short work of the Grunts, Jackels and Elites that Chief encounters just seconds in. But these aren’t the real threat. 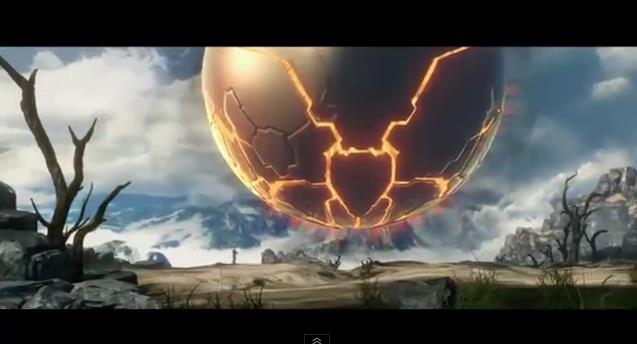 The introduction of a new Halo trilogy brings with it the introduction of a new major enemy in the game: the Forerunner. Although they’ve always played their part in the history of Halo, the Forerunner have never been featured in the games as combatable enemies. Halo 4 changes this and introduces a combat system which is unlike anything we’ve seen before. The first encounter with the Forerunner comes in the form of fast, scouring insect-like enemies, which appear to be the Forerunner Grunt equivalents. They’re fast and nimble but also appear to be pretty weak; the gameplay trailer showing Master Chief making quick work of them via some pretty efficient work with the assault rifle. They're not the only Forerunner enemy in the trailer, however. Remember the space pirates from Nintendo’s Metroid Prime? Throw them into the Halo universe, pump them with steroids and give them the left hook of Mike Tyson, and that’s pretty much what's displayed. For the first time in a Halo game, Master Chief seems to be faced with a serious challenge, and it certainly seems to add some pace to the game.

With the exception of the Legendary difficulty, Halo players will be also familiar with the concept of being able to destroy everything your path. Previous Halo games have pioneered Chief as a one-man army, but Halo 4 is set to change all this. No one is sure of the difficulty in the trailer, but Master Chief was getting thrown around like a rag doll. The Foreunner also come equipped with new technology, demonstrated in this case in the form of a shield. A thrown plasma grenade is propelled backwards by the Forerunner shield. It then circles around the Forerunner enemy, gaining momentum, before behind hurled back at Chief. Certain Forerunner enemies are also equipped with rectangular energy shields, which unlike the Jackels, can be equipped and unequipped as they wish. 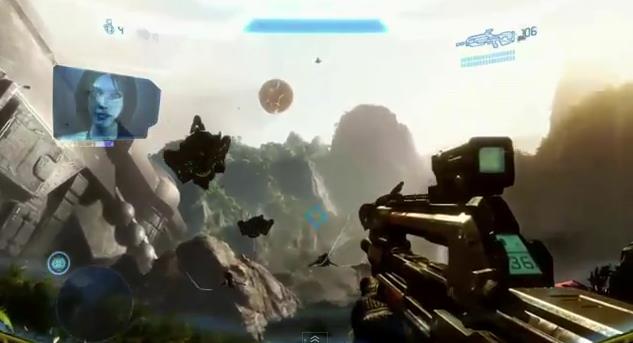 The advanced technology of the Forerunner is set to make some dynamic gameplay changes. This small display of Forerunner technology is surely just a small demonstration of what they’re capable of. Players will have to learn how to adapt unique playing strategies in order to deal with the different types of Forerunner enemies. They will also have to become familiar with a whole new arsenal of weapons, as the introduction of the Forerunner technology will most likely include their entire back catalogue of weaponry. Two weapons were displayed in the gameplay trailer, both boasting different uses. The first weapon is esentially a bad-ass version of the beam rifle from previous games, and seems to deal with Forerunner enemies a lot quicker than Chief's standard arsenal. The second is the Forerunner equivalent of the assault rifle, and once again, it appears to be twice as deadly. 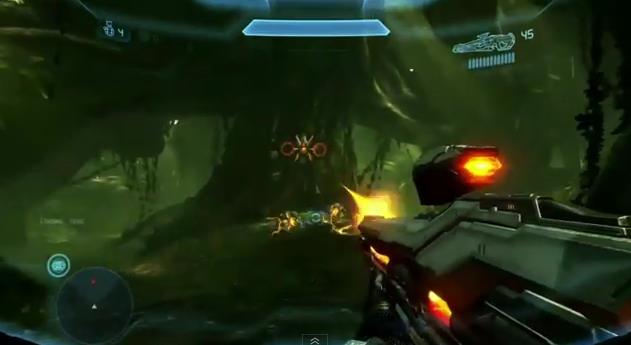 It’s unusual to see the HUD flashing with an empty shield warning so often, and it certainly adds a new level of intensity to the game. 343 are living up to their promise in creating a Halo as you’ve never seen it before, especially with the introduction of a focus on close-quarters combat. On more than one occasion, Master Chief is smashed to the ground after being on the receiving end of a Forerunner fist to the face. There also seem to be action-like commands where players can almost counter attack melee lunges made by enemies. As Chief lays on the floor, the enemy Forerunner pounces on top of him and we’re finally given a closer look at their appearance. A close up on the face seems to reveal that Ghost Rider has found his way into the world of Halo, but not before stumbling through the remnants of the Tron set. The design of some of the Forerunner enemies aren’t the most innovative things we’ve ever seen, and with the movement and characteristics of the stronger one, it’s certainly difficult to not try and compare them to the Space Pirates from Metroid. 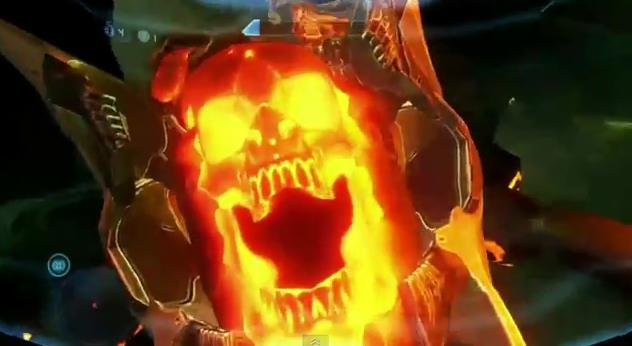 That said, Halo 4 is looking to be the most intense Halo so far. Any doubts over 343 Studios mishandling the franchise can now be safely laid to rest. If anything, the inclusion of the Forerunner is looking to bring an exciting new chage in gameplay, and is sure to constantly keep players on their feet. The only potential worry is that avid fans of the series could perhaps feel a sense of alientation with regard to the direction that the new trilogy seems to be heading. 343 have brought significant change to the Halo we have all come to know and love, and only time will tell if this new race of enemy will fit in as they should.