Granted, the Sims games haven't been targeted at hardcore gamers, but the newest installment in the series might have a little more to offer us than previously thought.  At first glance, The SIms Medieval looks likes it would appeal most strongly to casual gamers who want to live out their fantasies of being a princess (And the exclusive Princess Throne Room that comes with the Collectors Edition does very little to stifle that impression), however it seems that this game will also offer us magic, and monsters in addition to the option of building a little pink castle where we can play with our unicorns. 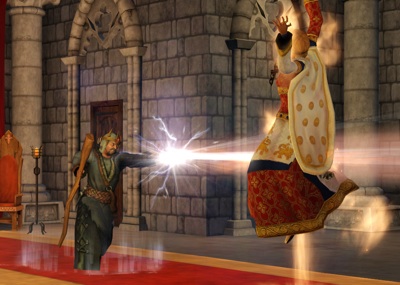 Sure, it isn't exactly going to rival Electronic Arts' other upcoming medieval game, Dragon Age 2, in terms of combat or role-playing, but the latest batch of screenshots shows us that there'll be some degree of action for your Sims to engage in, including duels between monarchs, wizard spellcasting, and playable Knights. 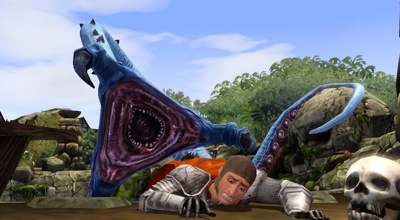 Sims Medieval is a stand-alone same, not an expansion to Sims 3, it will feature many RPG elements, including quests, leveling-up and customizable Hero Sims.  It comes out for Mac and PC on March 22nd; the Collector’s edition will offer the aforementioned Princess themed throne room, along with Barbarian and “Dark Magic” themes.