Now that Splinter Cell Blacklist is out in a few days, Ubisoft is blitzing fans with info on Sam Fisher’s newest adventure. Today’s video focuses on the Wii U version and how it takes advantage of the Gamepad.


Splinter Cell actually uses the Gamepad for some pretty nifty stuff. During normal play, the Gamepad acts as an inventory screen, allowing you to quickly switch weapons and gadgets on the fly. Certain gadgets, like the tri-rotor drone or the sticky cams, use the Gamepad’s screen as its camera and moves with the tilt of the controller.

The only thing I’m not a fan of is how it locks Sam with the “Look At The Wii U Gamepad” message while you are using those gadgets, since it makes the second screen experience kinda needless. I’d rather have the ability to control Sam while having those gadgets active, kind of like how Deus Ex: Human Revolution Director’s Cut allows you to look around while you’re hacking on the Gamepad. Regardless, it’s nice how Ubisoft utilizes the controller with their Wii U titles better than most of Nintendo’s efforts. I for one cannot wait to mark and execute enemies with the drone on the Gamepad. 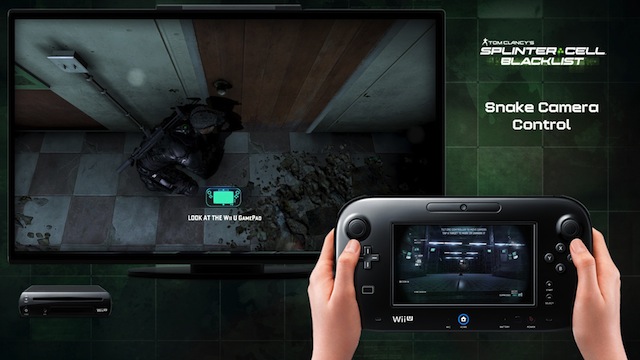 Tom Clancy's Splinter Cell: Blacklist launches on Wii U, both physically and digitally, via the eShop on Tuesday, August 20th, the same day as the 360, PS3, and PC versions.