"Rockstar FINALLY Gives Some Real Info On GTA Online Heists "
By: Zack Zwiezen | PC News - PS3 News - PS4 News - Xbox 360 News - Xbox One News | December 16, 2014
Over a year after release Rockstar has revealed what heists in Grand Theft Auto Online will look like and has given a release window of "Early 2015." Rockstar released a trailer on their website. The trailer shows off some of the heists and also shows some new content heading to Grand Theft Auto Online, like an aircraft carrier.

In an interview with IGN, producer and mission designer Imran Sarwar talked about some of the difficulties in creating the online heists and why it took so long for Rockstar to get them into the game. When asked why the heists took so long to create Sarwar explained that "..they just turned out to be a lot more difficult than we originally thought."
Sarwar continued and explained the challenges Rockstar faced in creating the much anticipated heists.
"..we started working on the concept: a series of multi-tiered missions featuring diverse prep work, a range of different types of gameplay and a big finale, where team coordination and playing your own distinct role could make the difference between success or failure.As it turns out, creating missions of that complexity for multiple players at the same time was much more difficult than we anticipated and every time we thought we were close, something would send us back to square one. Having already let players know of our intentions with Heists, every setback only increased the pressure to make sure we got them right." 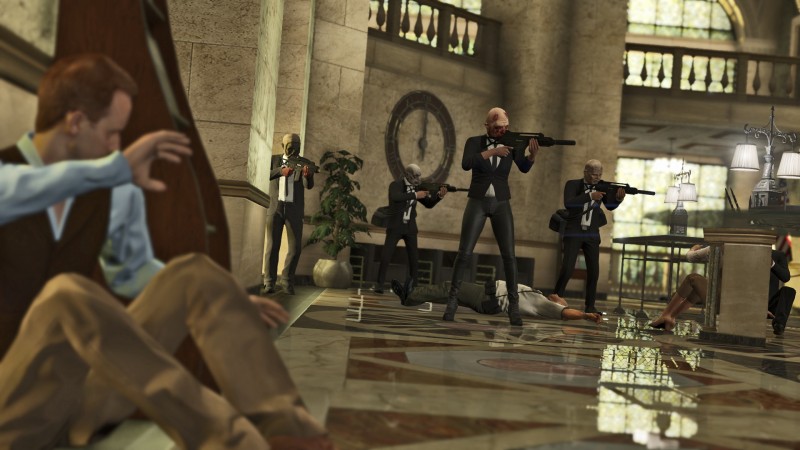 Heists will allow four players, all level 12 or higher, to plan out and execute a series of missions and eventually do the heist. Similar to single player, each heist will have different prep-missions, equipment needed, etc. One player will be the heist leader. This player needs to have an apartment that has a planning room. This player will be contacted by Lester and will decide outfits, how much each player will receive from the heist, and more. The downside is that this player will have to front the cost of the heist upfront and won't receive any money until the entire mission chain is completed.
When asked how many heists will be available when the update launches Sarwar said that there will be "..five unique strands involving over 20 total missions, which will add up to around 20 hours of gameplay. We hope players will then replay them multiple times to take on the other roles and to try different ways of tackling the missions. We’ve tried to add a lot of variety and there’s a mixture of open-ended gameplay, big set-pieces and a few surprises too."
You can read the full interview here at IGN.
Grand Theft Auto V is available for PS4, PS3, Xbox One, Xbox 360 and soon will be available for PC. You can read our review here.