Cartoon Network and Adult Swim will host a number of highly-anticipated panels, fan events and autograph signings at 2010 New York Comic Con at the Jacob K. Javits Center, Friday, October 8 through Sunday October 10, 2010.  See the full lineup for both networks below; please note all times, dates and locations are subject to change. 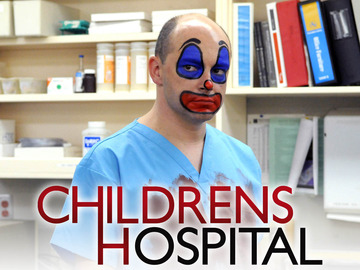 Check out the Childrens Hospital panel and hear from the show’s creative team led by Rob Corddry (Hot Tub Time Machine, The Daily Show with Jon Stewart) and Jon Stern (producer of The Ten and Scotland, PA). They will be joined by members of their ensemble cast including Rob Huebel (I Love You Man, Human Giant) and Erinn Hayes (Parenthood, Worst Week).  Childrens Hospital is a live-action comedy that explores the emotional struggles and sexual politics of a group of doctors charged with healthy libidos. Their dedication to their personal lives is relentless, interrupted only by the occasional need to treat sick children.  ChildrensHospital airs Sundays at midnight (ET/PT) on Adult Swim.

Adult Swim panel featuring Delocated! show creator/executive producer and star Jon Glaser.  After testifying against the Russian Mafia, “Jon” and his family are uprooted and start living undercover through the witness protection program.  After existing quietly in an anonymous suburb, “Jon” accepts an offer for the family to participate in a reality show based on their lives.  In order to protect their identity with television audiences—and more importantly, the Russian mob family the Mirminsky’s—they wear ski masks and have their voices disguised.  As part of the deal, the family is relocated to a sweet loft in New York City, where the series will be filmed.

Fans will get the first look at Cartoon Network’s original CGI movie, Firebreather, with an exclusive screening! Be the first to see the film, then stay for an in-depth panel discussion featuring creator and co-executive producer Phil Hester (The Wretch), co-executive producer Andy Kuhn (Freedom Ring) and writer/director Peter Chung (Aeon Flux). Firebreather is based on the popular comic book series and will premiere on Cartoon Network in November.

Come celebrate Ben 10 on 10.10.10 with the cast of Ben 10: Ultimate Alien!  Fans will be treated to a never-before-seen episode of the series with voiceover dialogue performed LIVE by Yuri Lowenthal (Ben), Greg Cipes (Kevin) and Ashley Johnson (Gwen)! Other panel highlights include a sneak peak at the new season ofBen 10: Ultimate Alien, cast Q&A, and a chance to win lots of Ben 10 Prizes!