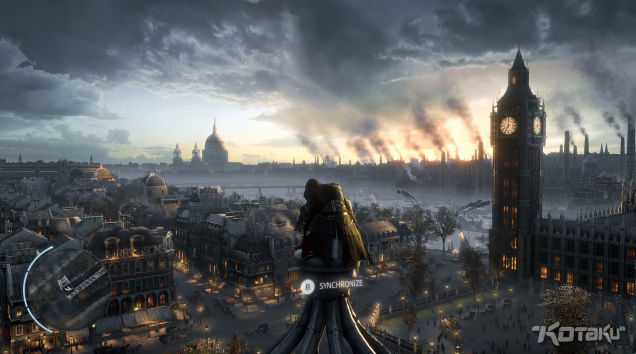 Kotaku has obtained information about an announced Assassin's Creed game, which will be set in Victorian London and will be out sometime next year. The game is being called Assassin's Creed: Victory, but this might be a codename or working title. Kotaku was able to see a video of what appears to be gameplay or a concept video. The video showed an assassin moving around Victorian London and killing targets. New features, like a grappling hook, seemed to be shown off. The game will be coming out for PS4, Xbox One and PC. It sounds like there will not be a Xbox 360 or PS3 Assassin's Creed game next year, unlike this year's Assassin's Creed Rogue.
Ubisoft has responded to the leak with a statement. Their statement follows:


It is always unfortunate when internal assets, not intended for public consumption, are leaked. And, while we certainly welcome anticipation for all of our upcoming titles, we're disappointed for our fans, and our development team, that this conceptual asset is now public. The team in our Quebec studio has been hard at work on the particular game in question for the past few years, and we're excited to officially unveil what the studio has been working on at a later date. In the meantime, our number one priority is enhancing the experience of Assassin's Creed Unity for players.


To read more about the leaked Assassin's Creed game and see more screenshots of it click here to see the original Kotaku report.
[Source: Kotaku]