"More like the not-so-nice and naughty guys "
By: Russ Matthews | Movie Reviews | May 24, 2016
Have you ever had those nostalgic moments and pulled out some of your favourite films from the past? After watching them for awhile, you realise that they contain more mature themes than you remembered? This has happened to me multiple times when trying to share films with others from the 80's. Some are more subtle and nuanced than today’s theatrical releases, but these experiences have led to some moments of surprise or even embarrassment.
Being set in Los Angles in 1977, gives the whole look and feel of Shane Black's The Nice Guys that throw back flavor of the buddy cop films of yesteryear. One thing can be said of this retro experience is that subtlety is not a characteristic trait of this dark comedy. Private investigator Holland March (Ryan Gosling) and local goon Jackson Healey (Russell Crowe) unwittingly cross paths to assist in finding and protecting a young lady named Amelia (Margaret Qualley) and to investigate her involvement in the death of the famous porn star, Misty Mountains (Murielle Telio). From their initial meeting they are at odds with one another, but determine that they must work together to get to the bottom of a series of deaths that center on the production of a pornographic film and a government investigation into the American auto industry. With many of their leads dying and the added difficulty of their lives being threatened, March and Healey feel the sense of urgency and a glimmer of justice to expose the true culprits behind this series of murders in the City of the Angels. 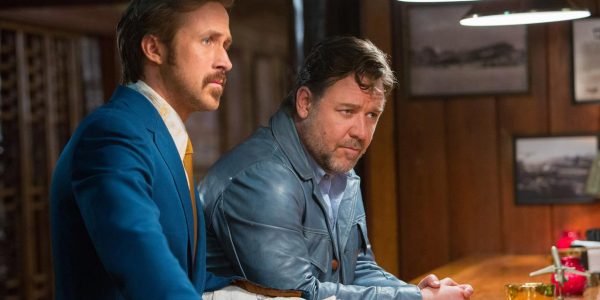 As a writer and director, Shane Black has proven to have a knack for developing strong pairings of male leads in action-comedies from Lethal Weapon to Kiss Kiss Bang Bang. With full creative license on the production of The Nice Guys and the provision of strong talent, the strength of this film rests soundly in the relationship between Crowe and Gosling. They do bring the needed nuances of a male relationship to make it all believable, humorous and entertaining. Their relationship is able grow through the typical banter of men getting to know one another and they are supported by a decent cast. Kim Basinger (8 Mile) gives a convincing performance as the mother of Amelia, but it is Angourie Rice (These Final Hours) as Holly March who commands attention whenever she is on screen. Her portrayal of Holland March’s daughter is mature beyond her years and she shows a confidence amongst this strong male cast that is impressive and deserves special acknowledgment. The humor and the relational bonds of the lead characters provide the nostalgic push to give this film some redeeming qualities. Unfortunately the excesses of the script drag down the overall value. With the porn industry being at the heart of this comedic mystery, there was no surprise that there was excessive nudity and language. Also, being an action film there should be an expectation of violence. The question has to be asked, where is the line of excess in all of these areas? Black takes these three categories to new extremes that eventually begins to muddle up the better aspects of the film. It is especially evidenced in the role of Holly March in this film. Angourie Rice was fantastic in her portrayal of the mature daughter of the woe-be-gone private investigator, but the situations that she is put in are distasteful. From being left in the boot of her father’s car to watching porn with a porn star to excessive neglect by her father, are all played for laughs, but produce a feeling of disgust. Trying to balance out the humor and action with these areas of repulsive content cause an uncomfortable response to The Nice Guys. 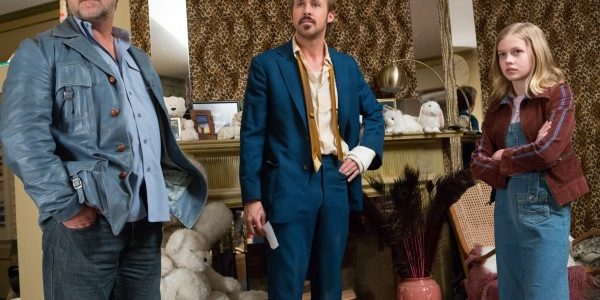 There was a new level of excitement about a buddy film that seems to have an intelligent, albeit humorous premise. The strength of the cast and the writing skills of Shane Black showed promise on arrival to the theater, but it was a short lived euphoria. The excesses of the surrounding elements caused this potentially great film to turn into a victim of attempting to push the barriers of filming. The Nice Guys turn out to be less than convincing as nice guys and it had so much potential, but ultimately fails with the final delivery.
Rating
6.0
Pros